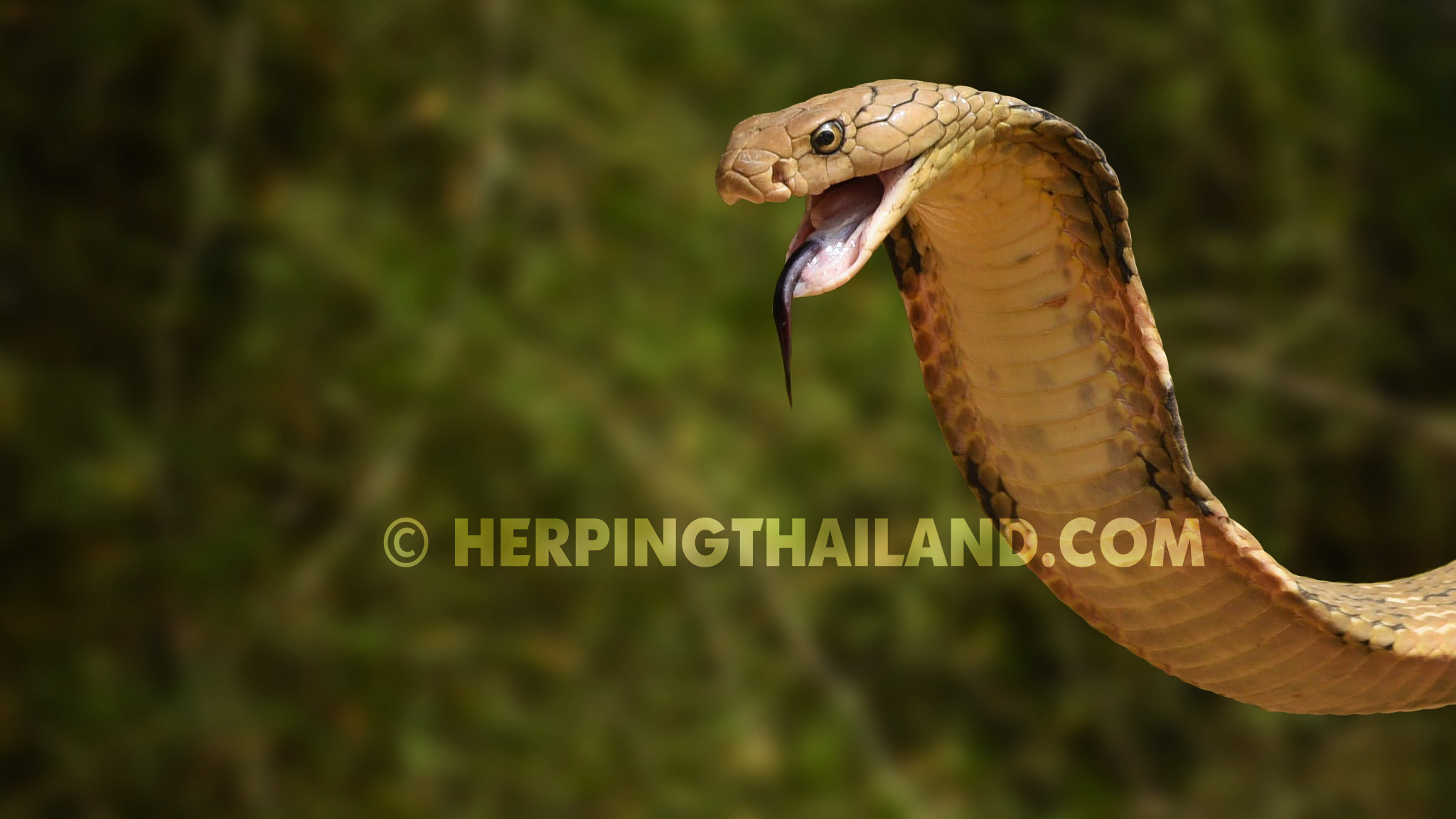 The King Cobra, Ophiophagus hannah, is the longest venomous snake in the world. Maybe partly due to this title, but also because its common name ‘King Cobra‘ that just couldn’t be more perfect, and not the least because it is simply an amazingly cool snake, these are the most sought-after snakes for field herpers that visit Thailand.
But being an apex predator within the world of snakes, it means population density is relatively low. They have very large home ranges, meaning the chance of an encounter is very small. And those people with a lot of field herping experience in Thailand know very well how rare a King Cobra sighting is. Even dedicated herpers living in Thailand are happy if they see just one per year. Yes, it is that uncommonly seen!
It is widespread, and so often discussed (also by locals – often enough they mistakenly identify other species as King Cobras ) that most herpers from other continents think it should not be all that hard to find.
We have been very fortunate with this species – starting to loose count, though still it is probably only averaging at maybe about 2 – 3 per year… -, but for a large part that is simply because of the unusual amount of time we have spent in the forests of Thailand. Not just for herping, probably even more often for allround wildlife watching. But seeing a King Cobra is for 99.9% a mix of simply time and luck. Having a lot of herping experience has virtually no impact on your chances with this species. A bit frustrating for sure. Most of our guests dream of a wild King Cobra sighting, but there is very little we can do to make this dream come true. It’s totally in the hands of Mother Nature if she believes you deserve to see one or not 😉
For many other snake species our experience and local knowledge will make a difference, but it hardly does for this charismatic species. 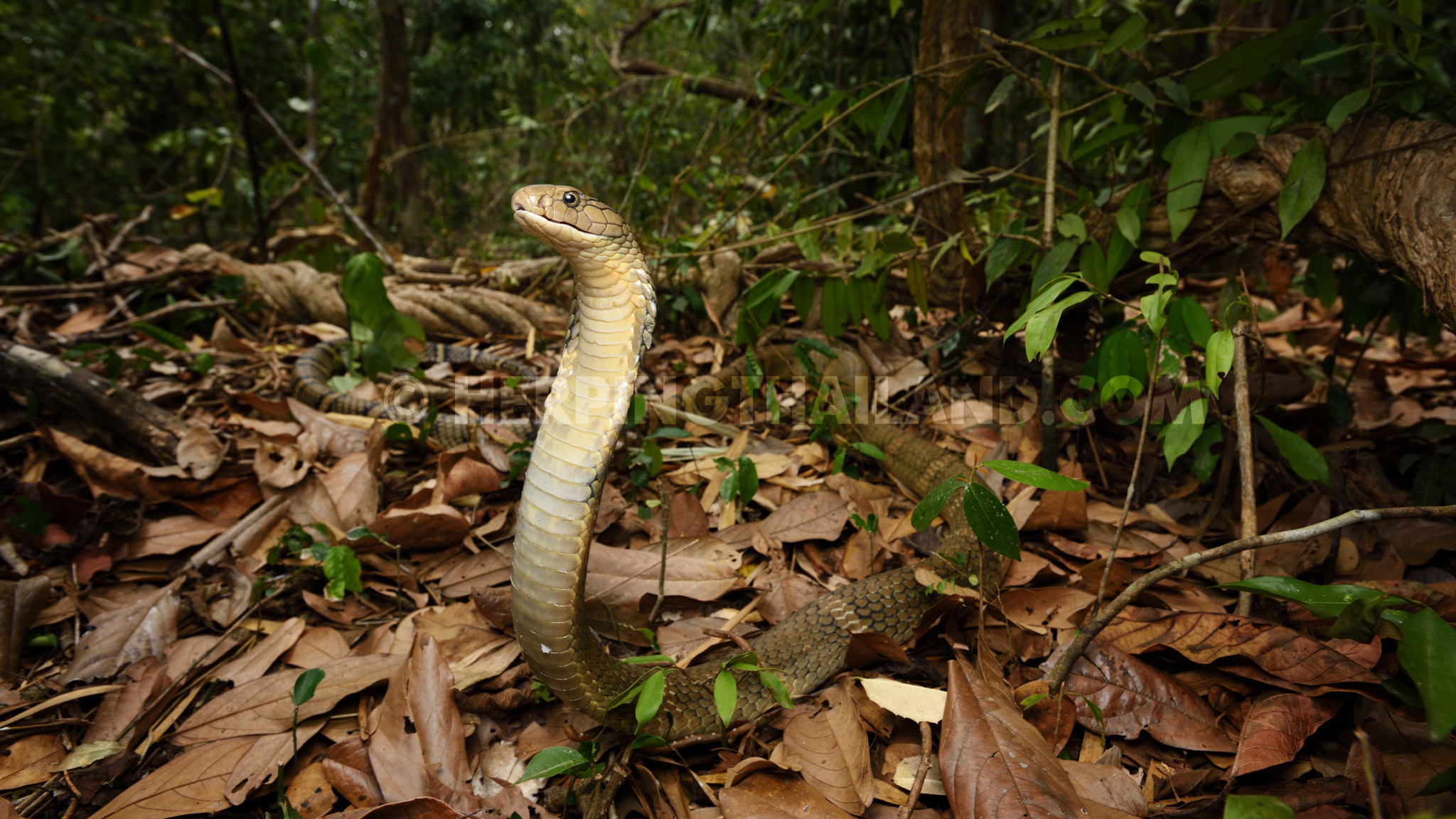 With a total length of over 5.5 metres, the King Cobra is one of the longest snakes in the country, and the longest venomous snake in the world. But average length is up to 3 – 4m. Unlike in many other snake species, the males actually grow bigger than the females. Another difference a friend of us found out when breeding King Cobras at home, is that females have less single subcaudals than males which usually have 8 or more undivided subcaudals. Other than this there is no clear visual sexual dimorphism.
The body color varies from near black to tan, grey, or olive. The ventrals are usually cream, grey, or pale yellow.
Juveniles are jet-black with thin yellow bands encircling the body.
King cobras have a rather bulky head, slightly distinctive from its neck. And they have fixed fangs in the front of their mouth. They are able to raise their head and flatten their neck to create a ‘hood’ which is usually 2 – 3 scale rows on each side of the ventrals wide. The hood has a rather elongated shape, not like the more spoon-like hoods of the true cobras (Naja sp.).
The eyes have round pupils. It has 15 dorsal scale rows midbody. And distinctive, large occipital scales at the back of the head; see the image of the King Cobra head scalation compared to the Monocled Cobra. 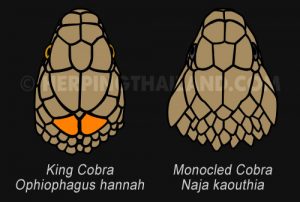 The King Cobra is most likely to be confused with the other cobra species, or some of the rat snakes especially from the Ptyas genus. The rat snakes occasionally raise their heads in defense, but unlike the cobras the neck will be laterally inflated. And the ‘hood’ of the true cobras is much more distinct (much wider than the body) than in the King Cobra.
As of September 2016, the google results for the keyword “King Cobra” show the wrong species as the first image. The snake in the picture is a true cobra – Naja sp., probably Naja naja – but definitely not a King Cobra. Surprisingly the image is hosted on a national geographic website, but not from one of their official photographers… anyhow confusing 😉
King Cobras can grow over 5m long, which none of the below species can, size could rule out certain options.
Another unique feature on the King Cobras are the large occipital scales, see the image. 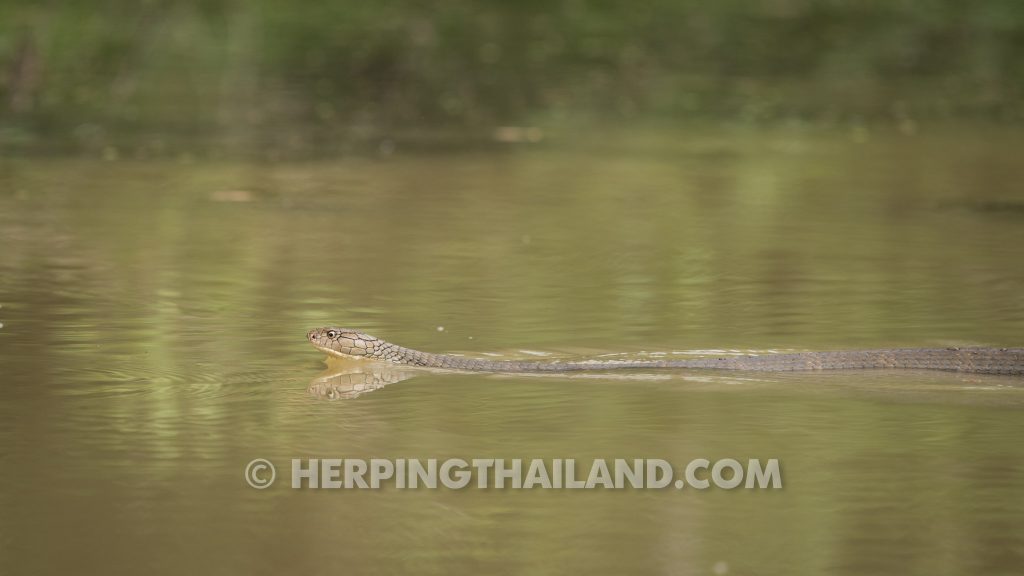 Coincidentally, we met DR. Matt J. Goode on one of our visits in Khao Yai national park. He had just been visiting the research team in Sakaerat Environmental Research Station to assist with the telemetry project on Ophiophagus hannah, King Cobra. His telemetry projects in collaboration with Romulus Whitaker in the Agumbe Rainforest Research Station in India, have given a previously unknown insight in the lives of King Cobras and he was so kind to share some of the amazing things he had learned during those studies. His study proved that King Cobras have established home ranges, and they know their way around these huge ranges. The snakes revisit burrows even long periods after their last visit. When a King Cobra was relocated far from its original home, daily movement was much higher, and no revisiting of burrows was reported. Also the range it covered was significantly larger than from the individuals that were released back in their own home ranges. It seemed they were ‘lost’. The ones that were released near the spot they were captured, clearly showed they knew their way back to particular sites they had been using previously. Also, a translocated king would cease feeding and reproductive activities.
It shows the importance of releasing snakes back at the same spot as caught. 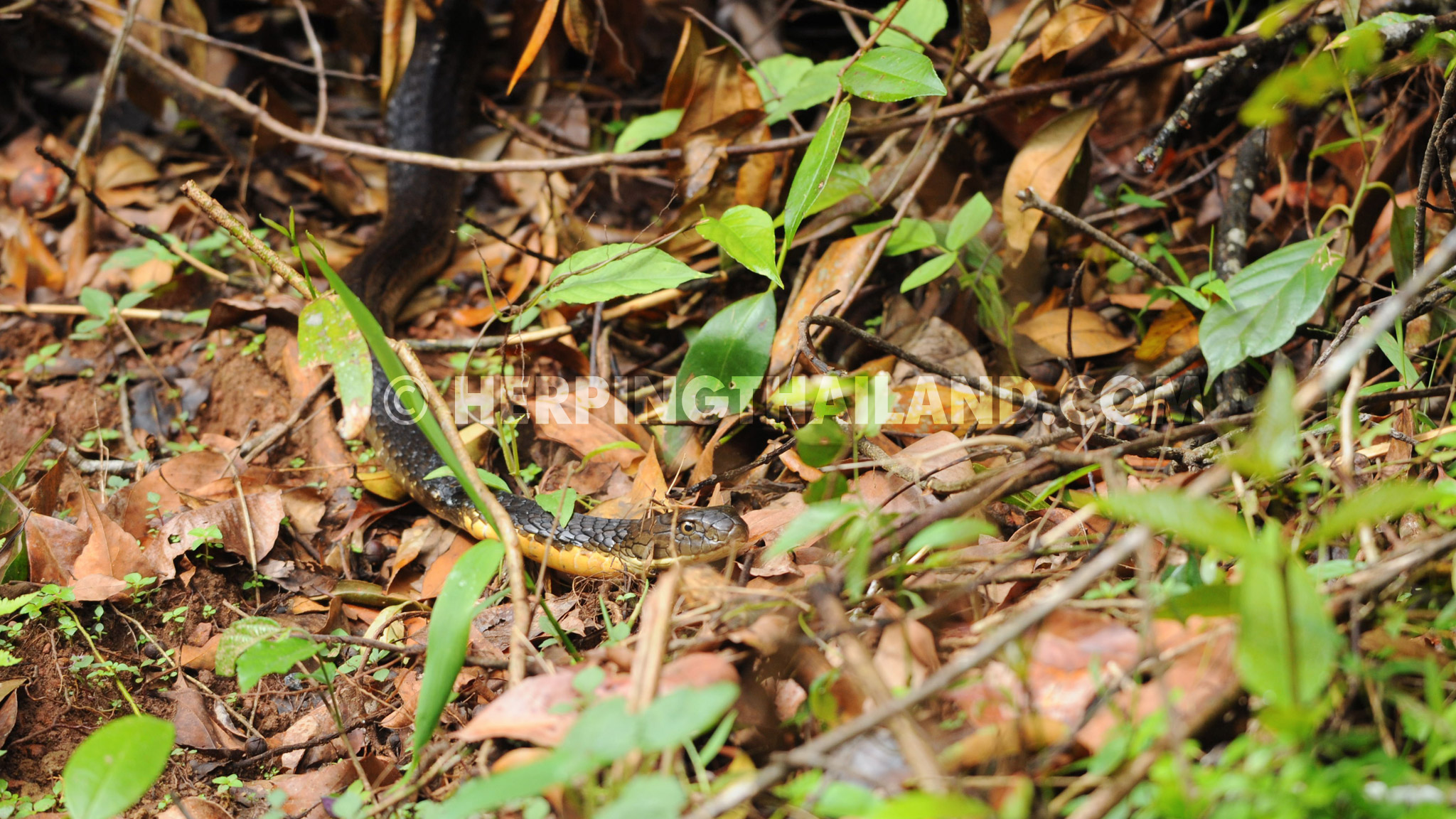 King Cobras can be found throughout the whole country of Thailand. They are tolerant to a certain amount of human development, are found in agricultural areas, but seem to mainly prefer forested areas. Virtually all our sightings have been in forested areas, often in evergreen forest.
Found near streams, piles of dead branches and logs, and sometimes they use termite mounts, burrows, or fig tree roots to seek for cover. Roadsides with dense bushes nearby for escape are sometimes used for basking in the mornings. There also seems some preference for streams with bamboo on the banks, and sometimes they are found in caves (we think this is often just before shedding, but perhaps sometimes just for shelter.) 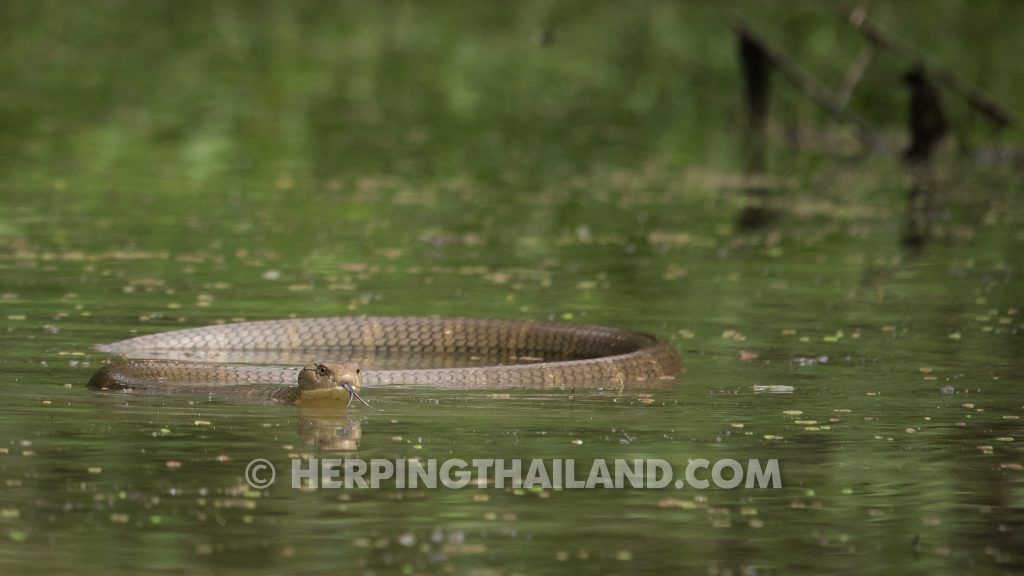 There is talk about splitting this species into multiple species in the future. Most likely Thailand will have two species, but who knows, maybe more… there is a variation we see in West Thailand that doesn’t quite seem to fit with e.g. the Eastern localities… but maybe it is just variation within a species.
Even nowadays some people already use certain common names for different localities, e.g.: 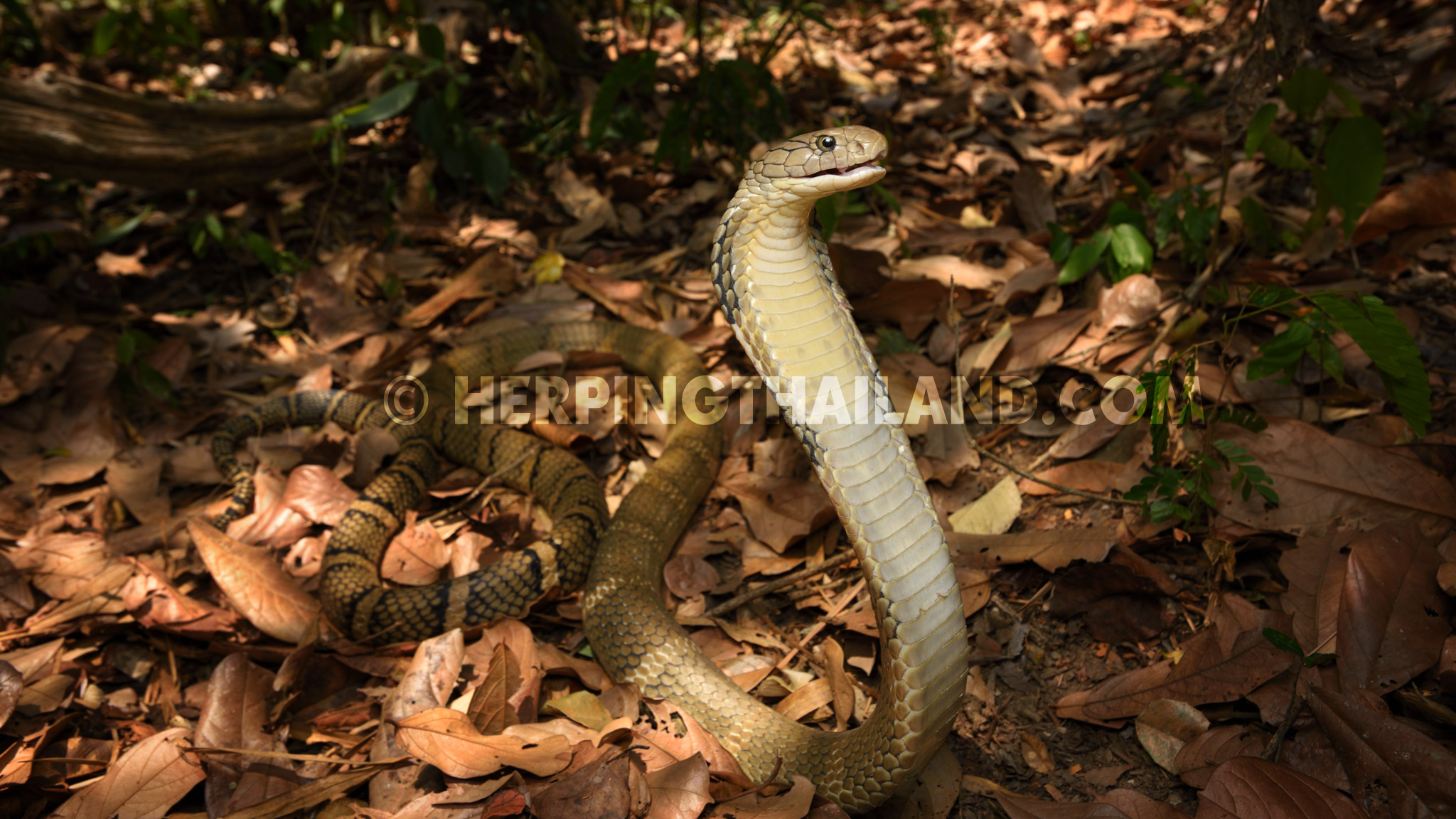 In Kaeng Krachan we have encountered light-colored specimens with a pronounced banded pattern towards the tail. This strong pattern seems absent in the specimens further South. 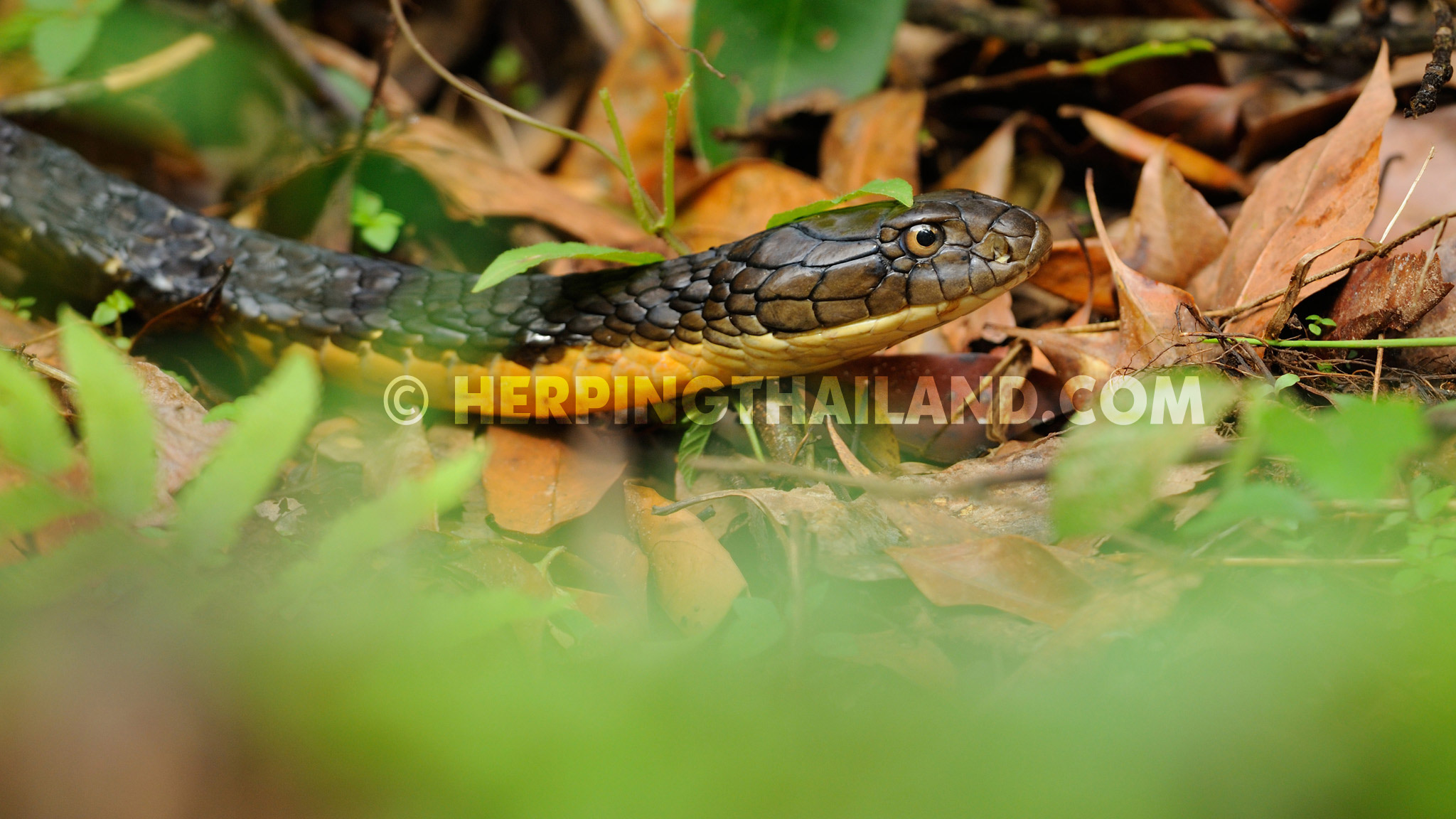 The ‘Malaysian’ King Cobras, Ophiophagus cf. hannah found in Southern Thailand, on the Malayan peninsula, are usually light in coloration, with weak thin bands. We have spent little time in the South so have yet to photograph this variety/ species. From pictures of the juveniles that we have seen, there seems to be quite a difference with the juveniles we have seen in Khao Yai national park. 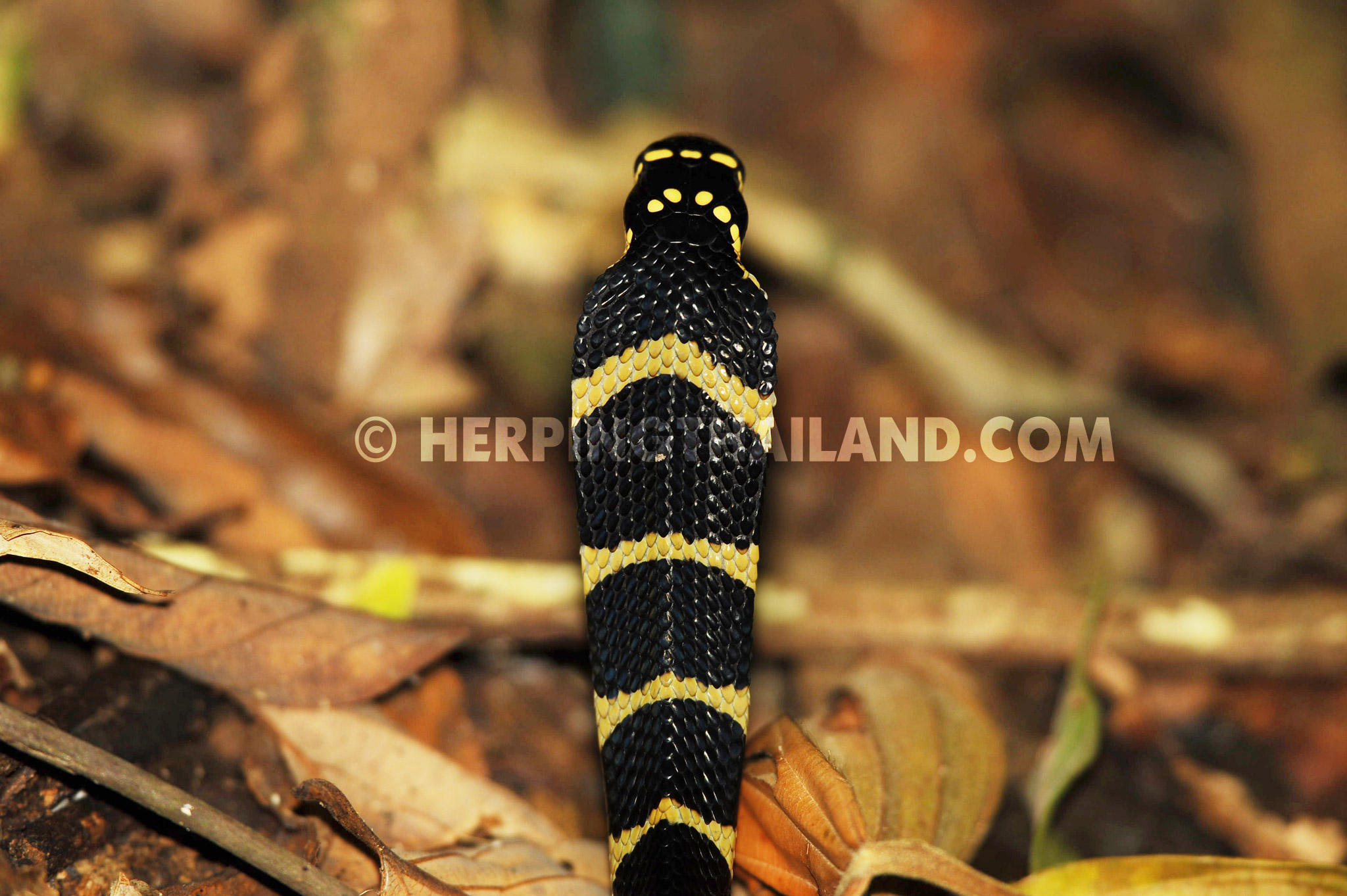 Let’s hope this whole subject is cleared up soon by an official publication.

How to find a King Cobra in Thailand?

Some last notes on how to find a King Cobra in the wild (even though we already explained, there actually is no ‘recipe’). Quite a few of our sightings have been near piles of dead branches/ logs which offered cover for the snake, but also good basking opportunities in close vicinity. Several sightings have been near forest streams. But also just on road sides with enough vegetation to hide in if they need to get away.
9:00 – 11:00(AM) and 15:00 – 18:00(PM) seem to be peak ‘activity’ times. The part before noon being mostly basking, while the late afternoon the individuals we have seen seemed more actively on the move. But other that that we just recommend to spend a LOT of time in the field, and bring a truckload of luck 😉 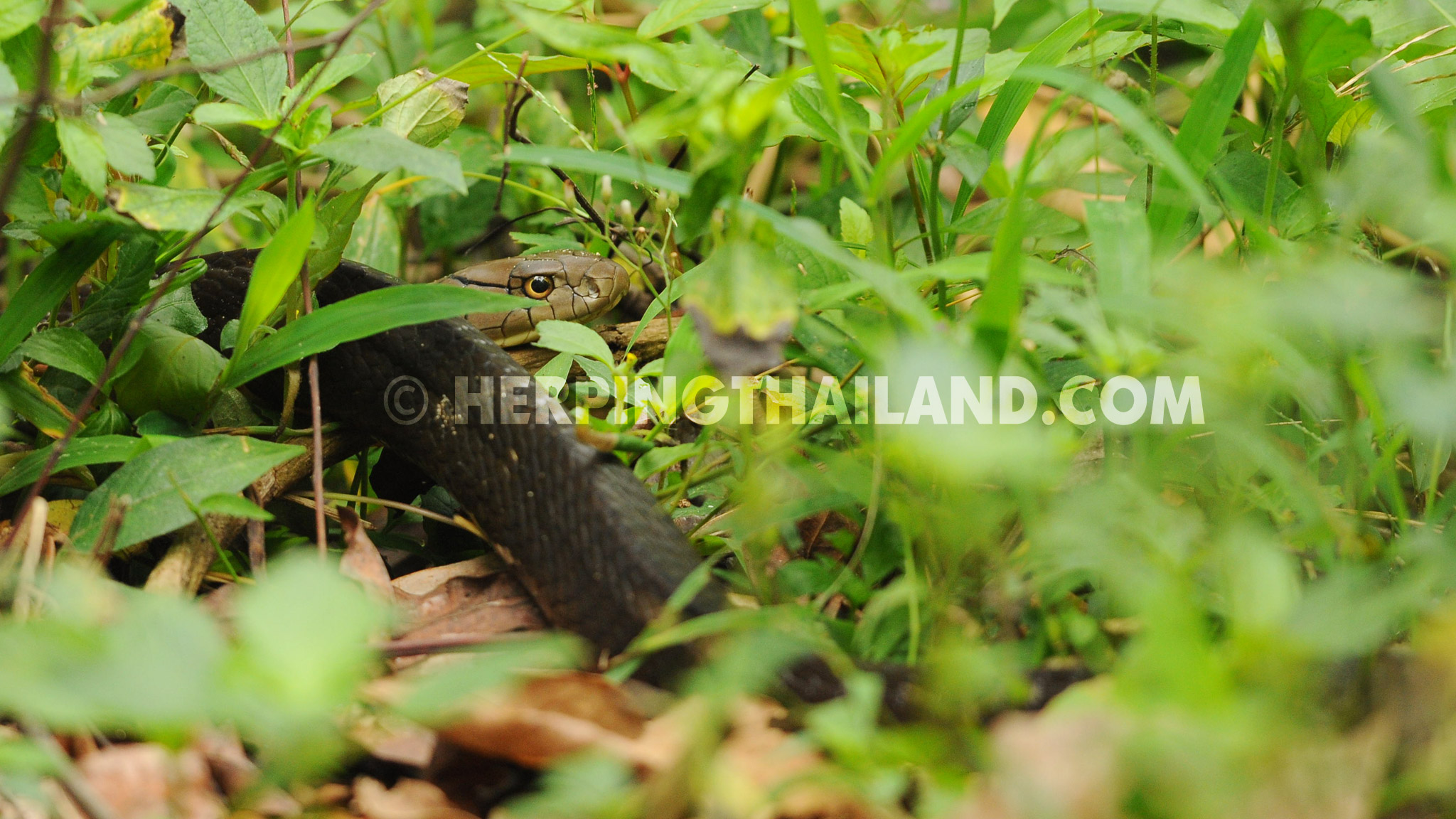