For long, only 3 species of Krait (excluding the sea kraits) were known to occur in Thailand; the Banded Krait, the Malayan (or Blue) Krait and the Red-headed Krait. In a book publication in 1999 this almost changed.
A photo by K.-D Schultz was published in “Amphibians and Reptiles of Peninsular Malaysia and Thailand” by T. Chan-ard, W. Grossmann, A. Gumprecht & K.-D. Schulz with the accompanying text:
“Bungarus cf. multicinctus
Many-banded Krait
Vielgebänderter Krait

But the authors had overlooked that the snake in the picture was not a krait at all… the easiest way to tell is the lack of the enlarged vertebral scale plates typical for the Bungarus genus (only not as distinctly visible in the Bungarus lividus).
The picture showed the harmless Dinodon septentrionalis, Northern Large-toothed Snake.

It shows that professional herpetologists are also just human. And on a positive note, better to believe a harmless large-toothed or wolf snake is a dangerous krait, than the other way around… (google will find you the story of Joe Slowinski, who was less fortunate with a wolf-snake-versus-krait-ID)

Even till today, many sources mention Thailand as part of the range of the Bungarus multicinctus, but all based on this false record.

However, in July 2016, we went on an expedition to a hardly-explored region of Thailand. We were not targeting kraits, but ahead of this trip, we did joke about how we were going to record the first Many-banded Krait in Thailand.

OK, we were not ruling out that this species could occur on Thai soil, but certainly we were NOT expecting that we would confirm its presence in Thailand within less than an hour in the area!
The night started great with a big Bungarus fasciatus crossing the road. And really in less than an hour, a 2nd snake revealed itself. We jumped out of our car and couldn’t believe our eyes. We really couldn’t. All we were saying was: “This looks very interesting! Very interesting!” Afraid to jump to conclusions too fast, we asked others about their opinion, initially even adding that it could well be a weird morph of a Bungarus candidus. But everyone agreed that it did not look anything like a Malayan Krait.

With a total white band count of 50, and based on the range, we concluded it to be Bungarus multicinctus wanghaotingi.

However, in 2018 a publication by Xie et al. revealed that the specimens known from China that had been recorded as Bungarus multicinctus wanghaotingi actually turned out to be Bungarus candidus. If correct, that means it will be almost impossible to distinguish these species visually. This has cast some doubt on our find as well. Perhaps our find is just an unusual looking variation on Bungarus candidus. A genetic study will be required to give us a final answer. To be continued! 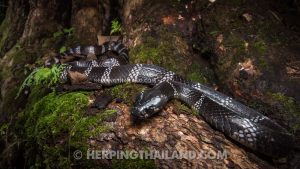 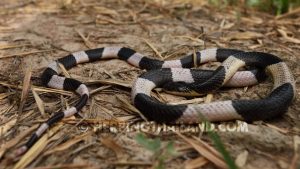 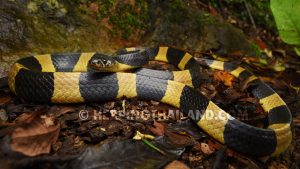 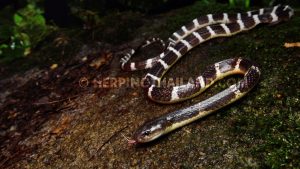