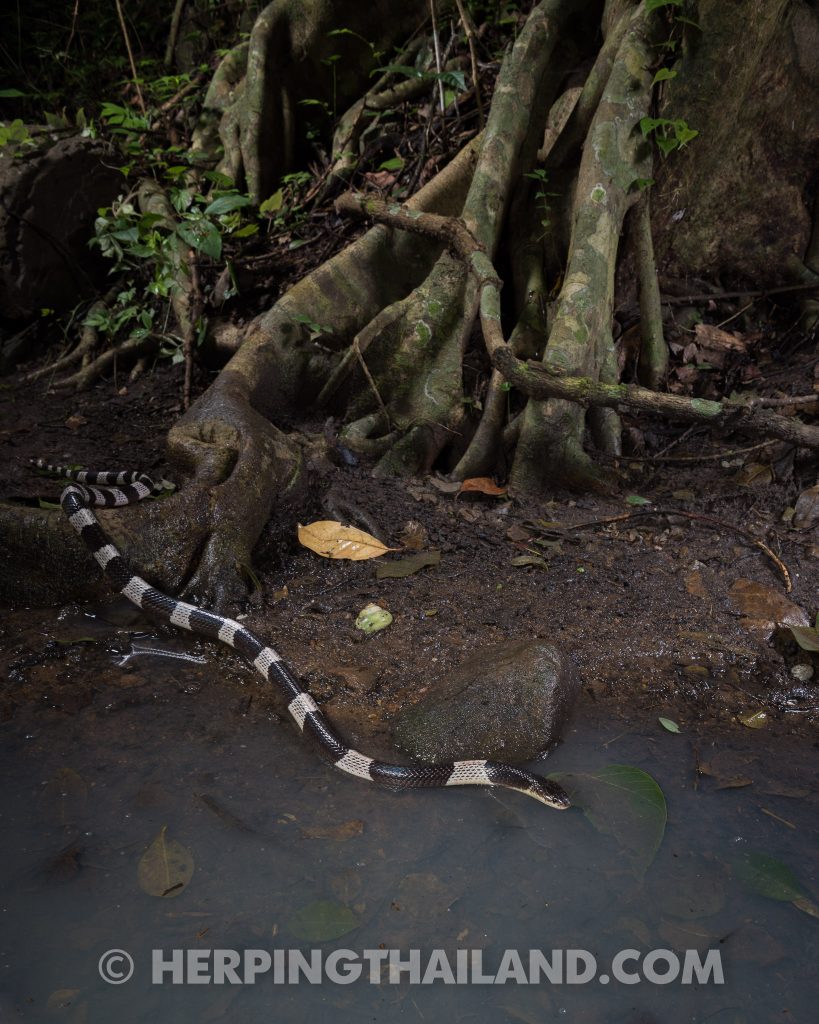 The Bungarus candidus commonly known as Malayan Krait or Blue Krait, is one of the most common species of Kraits in Thailand. It occurs in a wide variety of habitats and is found from low to high elevations. There seem to be some minor differences between populations in different parts of the country, who knows this could one day be considered a complex of species…
We have encountered this species in humid evergreen forest, but also in arid conditions on sandy soil.
Like all kraits, the Bungarus candidus is highly venomous and should therefore be approached with care. 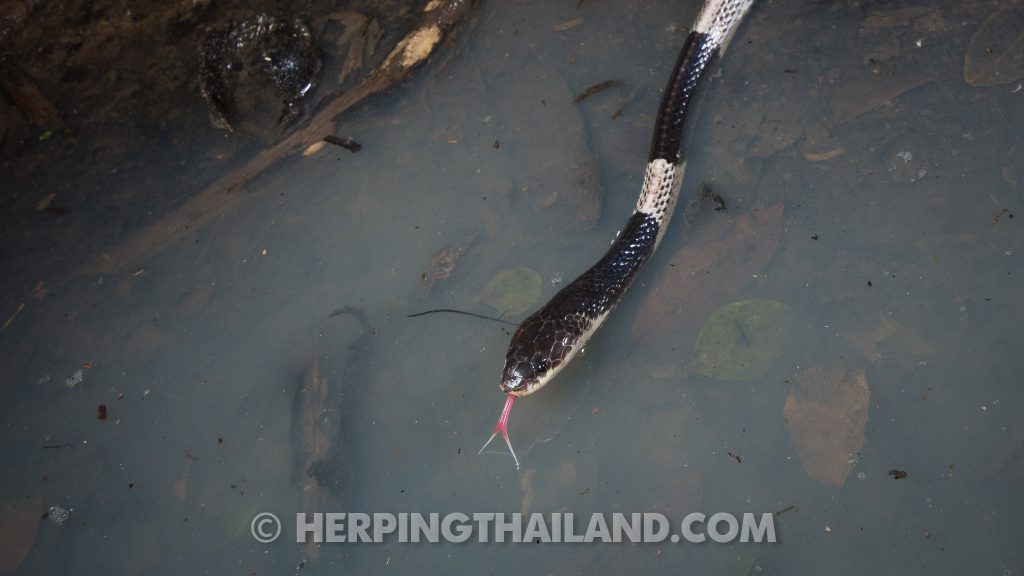 In Thailand the Malayan Krait, Bungarus candidus is virtually always banded, black and white. All black specimens might occur though seem to be extremely rare in Thailand.
Northern specimens tend to have thinner white bands than the Eastern or Southern/ Western specimens in which the white bands are generally wider. Most of the time the white bands have little black specks.
Take extreme care when identifying black-and-white banded snakes, as even various professional herpetologists have made huge mistakes (in some case even a fatal mistake!). Do not free-handle any black-and-white-banded snake until you are 200% sure it is one of the harmless species.
Kraits are known to be docile in daytime, and some people therefore consider it to be ‘safe’ to free-handle these snakes in daylight. Not the smartest move in our opinion… Be careful because the venom of these snakes is very potent. 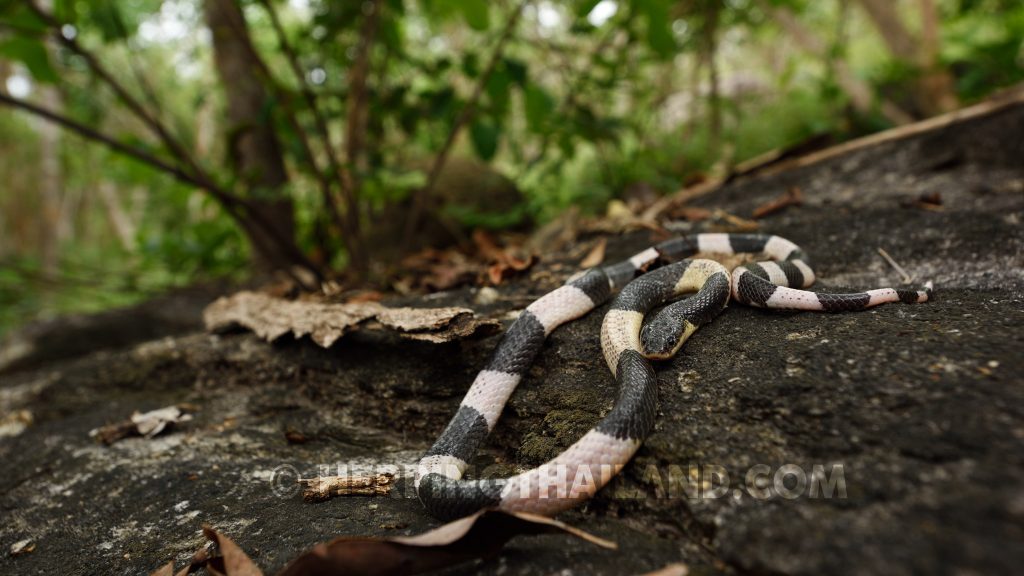 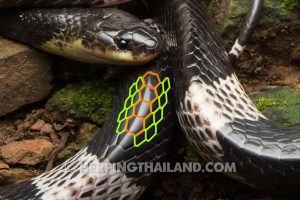 Enlarged vertebral scales (highlighted in orange) of Bungarus candidus, Malayan Krait. The other dorsal scales highlighted in green are much smaller and differently shaped. 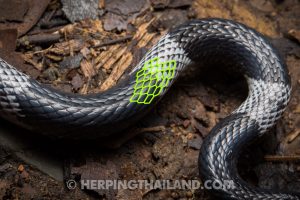 There are various species that resemble the Bungarus candidus. The easiest way to tell it’s a krait is by the significantly enlarged vertebral scales, the single middle row of scales. Still, be careful, especially in younger specimens this might not always be as clearly visible.
I won’t mention all black-and-white banded snakes here, various wolf snakes, as well as the bridle snakes could be confused with kraits. The bridle snakes have a much longer and slender appearance than the Malayan Krait, but the wolf snakes are very similar in built. I will mention the one of the best mimics, plus some other species including the other black and white Thai krait that could be confused with the Bungarus candidus.

These snakes are nocturnal and primarily terrestrial, though there have been records of them climbing trees. They are active hunters that will move around at night in search of prey, mostly other snakes.
Interesting behaviour in all the krait species is that once ‘under attack’ (when you get too close) they will hide their heads under the coils of their body and the muscles seem to be very tight. If bothered it might make short powerful moves and then freeze in a new position. In most cases there is no attempt of biting, but obviously care should be taken! 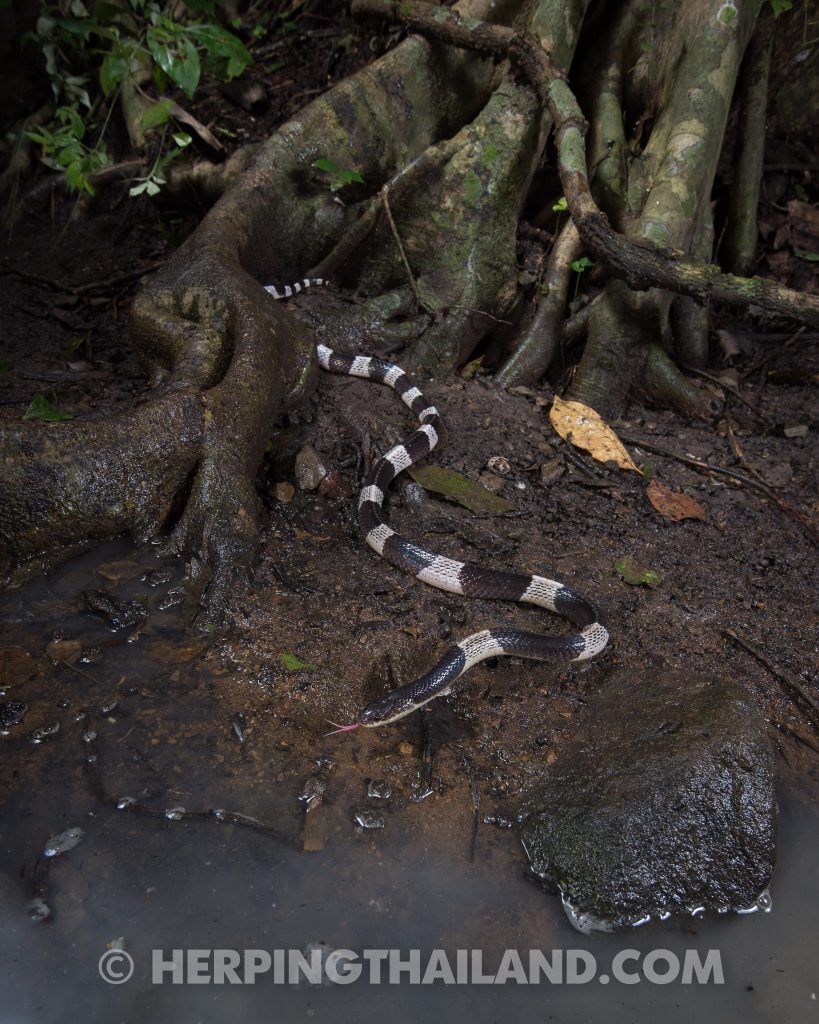 Malayan Krait (Bungarus candidus) are mainly terrestrial, though have been recorded climbing trees.

As mentioned earlier, the range of the Malayan Krait, also known as the Blue Krait is widespread throughout all of Thailand. And habitat type varies a lot from moist primary evergreen forests to dry deciduous shrubby areas with sandy soil.
Waterways and rocky areas seem to be amongst their prefered habitats, though not exclusively.

There is a bit of variation between the Northern, Eastern and South/ Western populations of the Bungarus candidus. Maybe this might proof in the future to be enough ground for splitting the species into multiple species. 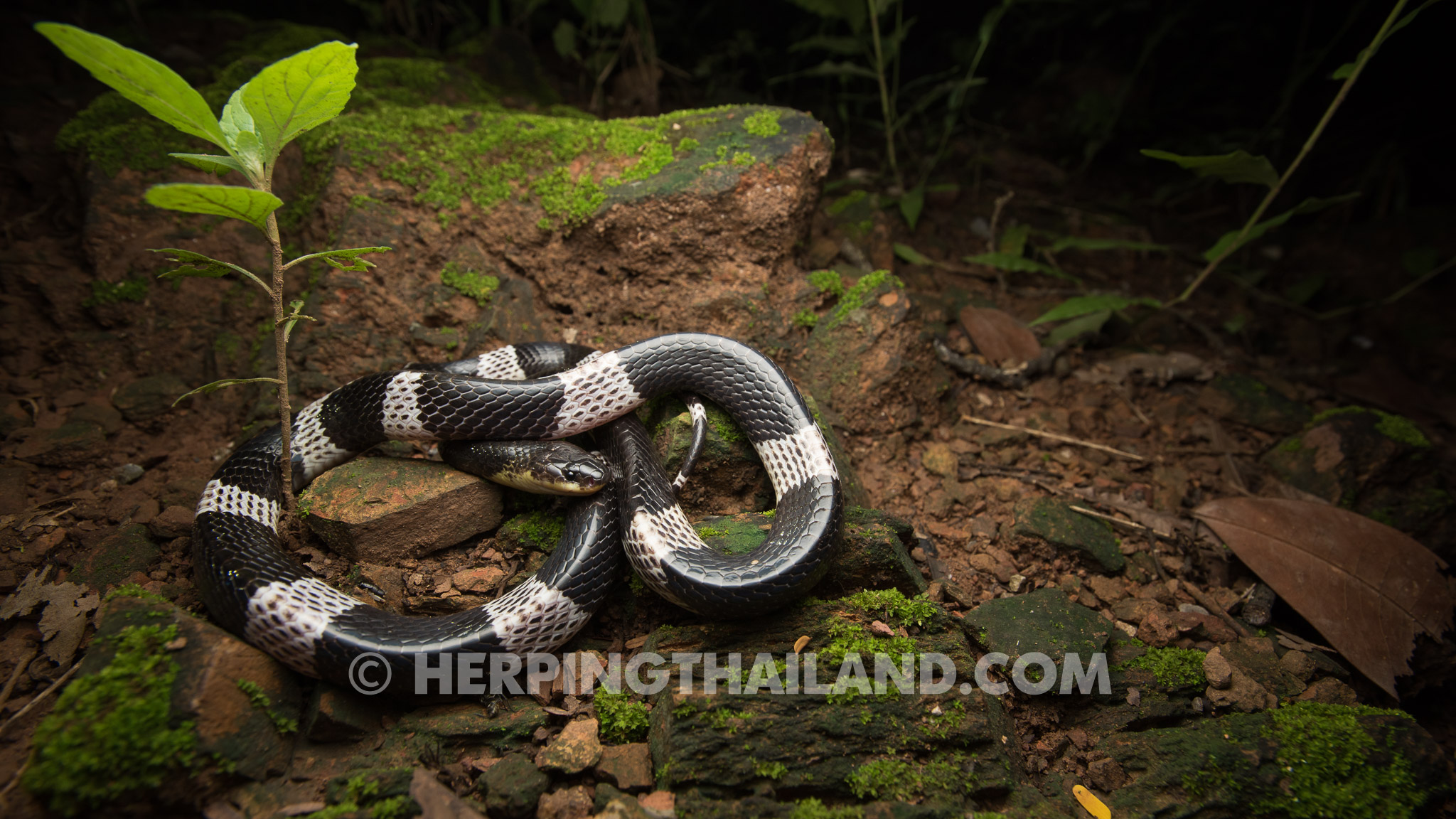 Since the Bungarus candidus is a nocturnal species, the best time to look for them is at night 😉
And because kraits are primarily snake eaters one can guess that their population density is likely to be lower than most other snakes species. In other words, it’s not a species you will encounter everyday. One of the reasons it is high on the list for most herpers that visit Thailand. My experience is that they are most active in the wet months of the year, and searching near waterways and rocky areas seems to increase your chances. They are not the best camouflaged snake species in Thailand, so you might not need skilled/ trained herping eyes. It’s generally just a matter of time and luck to come across one. Once you do cross paths, it is usually hard to miss.