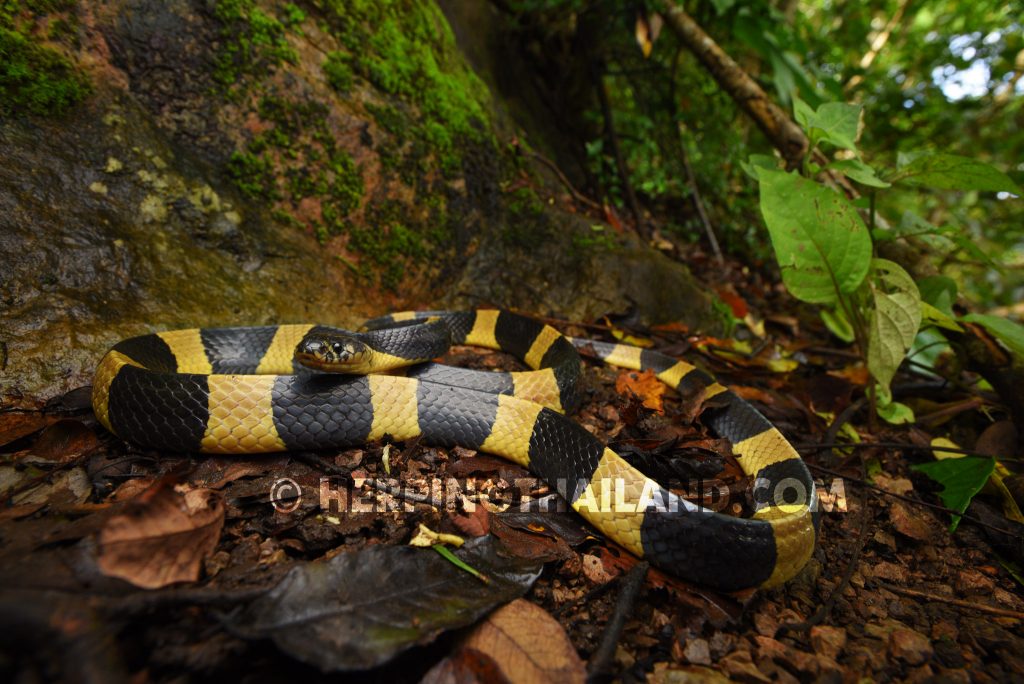 Even though the Banded Krait (sometimes referred to as the Yellow-banded Krait) – Bungarus fasciatus is perhaps the most common of all the Thai kraits, we personally believe it is also one of the most beautiful ones. The combination of its movement and the striking black and yellow pattern, make it hypnotising to watch. The Banded Krait is the largest of all kraits, and can reach over 2m. The venom is supposedly not as potent as the other Thai kraits, but a bite could anyhow be life-threatening!

The amazing black and yellow pattern of the Banded Krait, slithering through a forest streambed in North Thailand. 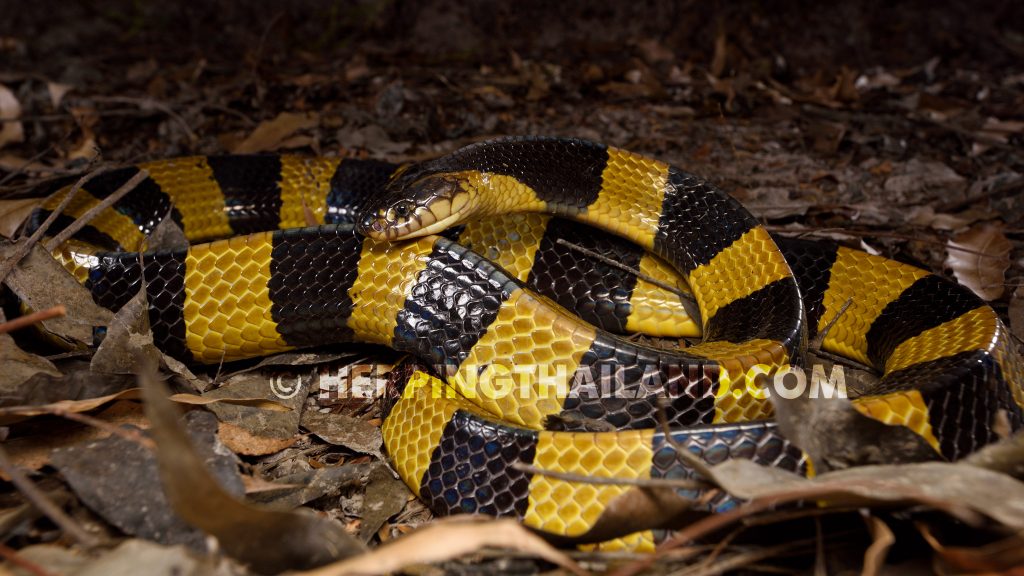 The Banded Krait – Bungarus fasciatus – has a black body with yellow bands usually of pretty much equal width of the black bands. The body is strongly triangular shaped with enlarged vertebral scales, the head can be quite distinct from the neck. The Banded Krait has a thick stumped tail.

The tail of the Banded Krait (Bungarus fasciatus) is stump and might function as a false head to distract predators. 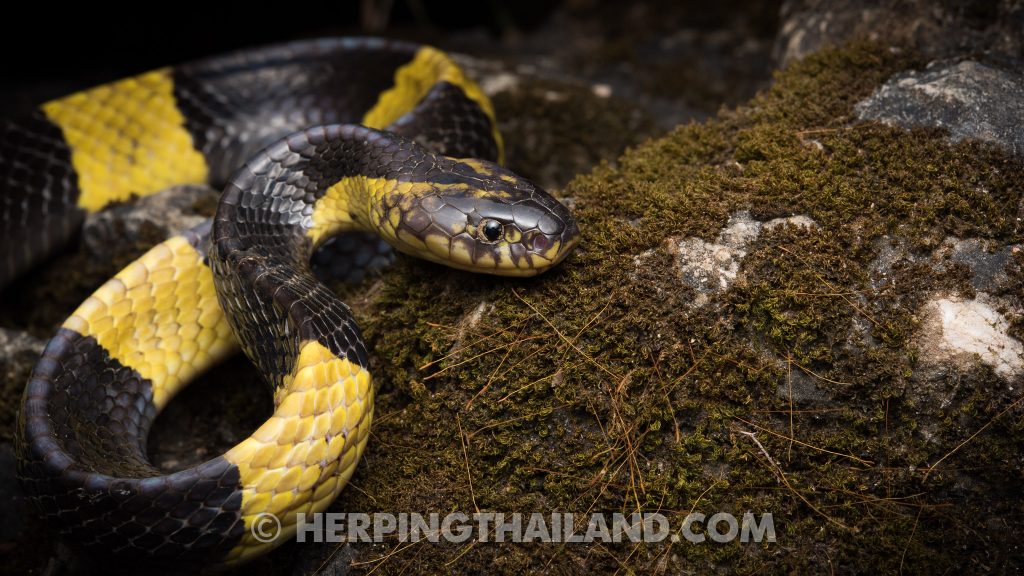 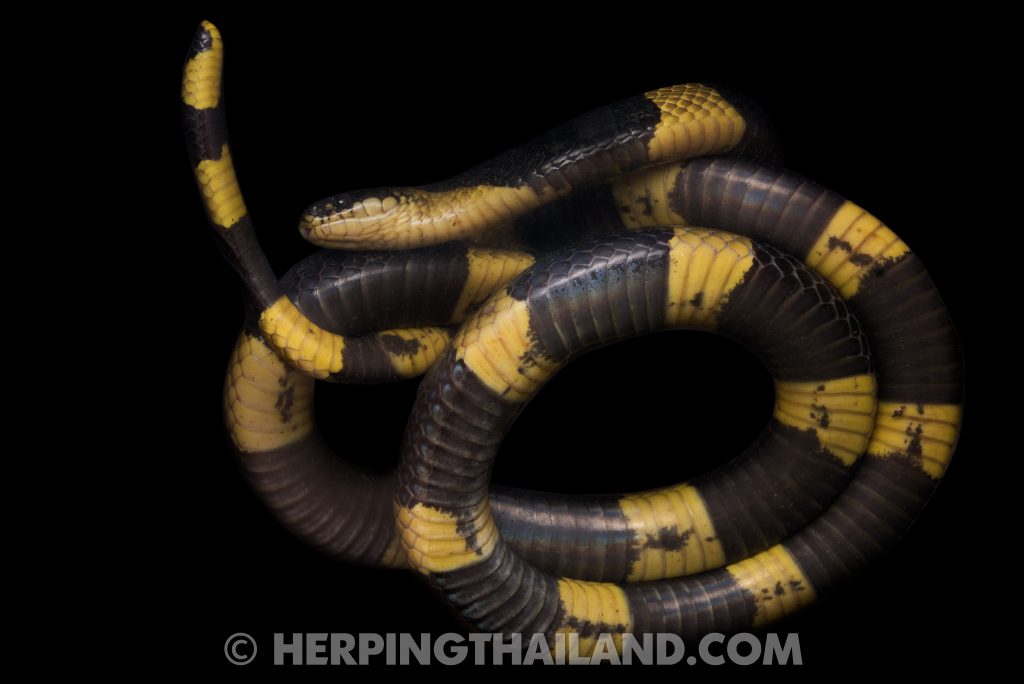 Ventrals of a Banded Krait (Bungarus fasciatus) in Ranong, Thailand 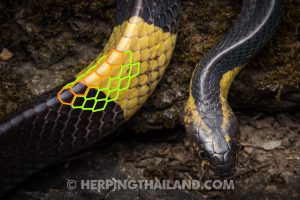 Banded Krait (Bungarus fasciatus) has enlarged vertebral scales, this is one row of scales over the entire length of the body (highlighted in orange) that is easy to distinguish from the other dorsal scale rows which are smaller and differently shaped (highlighted in green).

There are a couple species that might look a bit similar, though generally this species is quite easy to distinquish by it’s characteristic pattern. Most slighlty similar looking species lack the enlarged middorsal scale row. With the exception of the Mangrove Cat Snake (Boiga dendrophila), but the two can fairly easily be distinguished by different pattern. 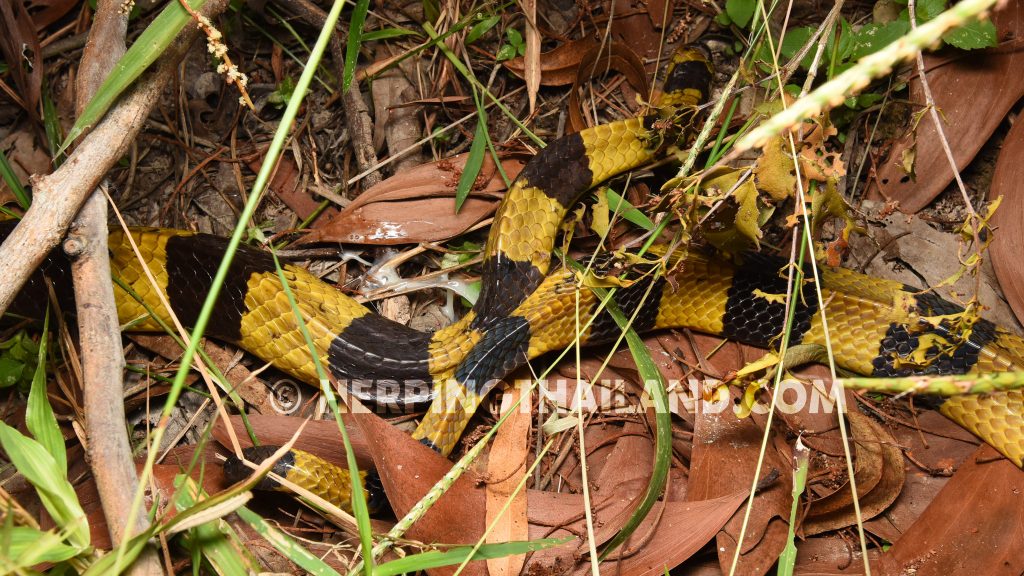 The Banded Krait, Bungarus fasciatus is a nocturnal species. It is terrestrial and hunts actively for its prey. In all these years we have only seen one active in daytime in evergreen forest, but this seems unusual for this species.

Surprisingly, the Banded Krait pattern blends in when it has a little bit of cover.

The Bungarus fasciatus is found throughout Thailand. Though, from what we have heard it seems to be less common in the far South of the country. They inhabit quite a variety of habitats ranging from open agricultural areas to primary evergreen forests, and also mangrove forests. Often near waterways. 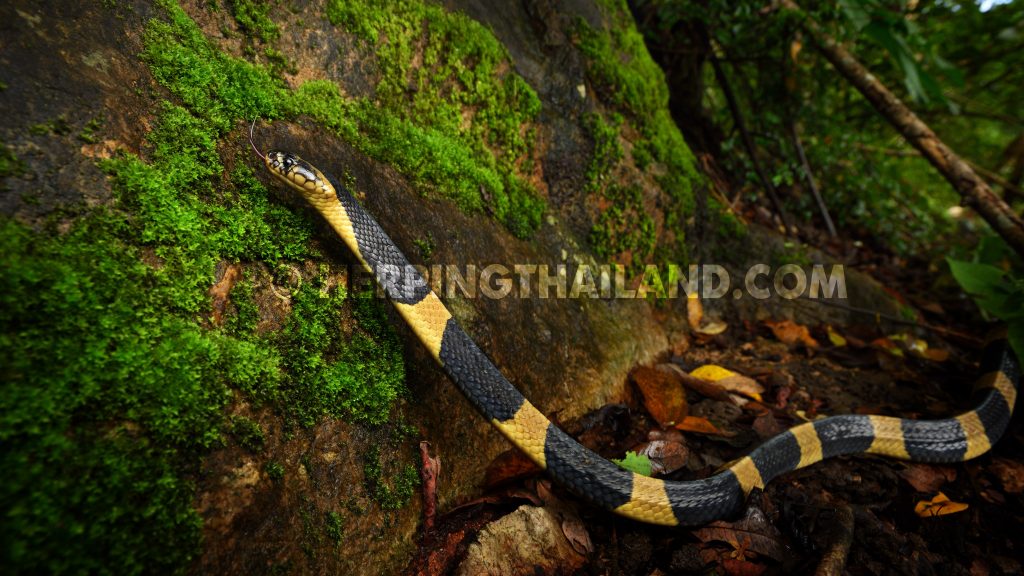 This Banded Krait was found near a limestone outcrop in a mangrove forest.

Recent DNA research (Laopichienpong et al. 2016) suggests there are multiple species within the range of what is now known as the Bungarus fasciatus. Even though minor differences seem to be present between individuals we have seen in the East and in the South-west of Thailand, not sure if this is just local variety or difference at species level. 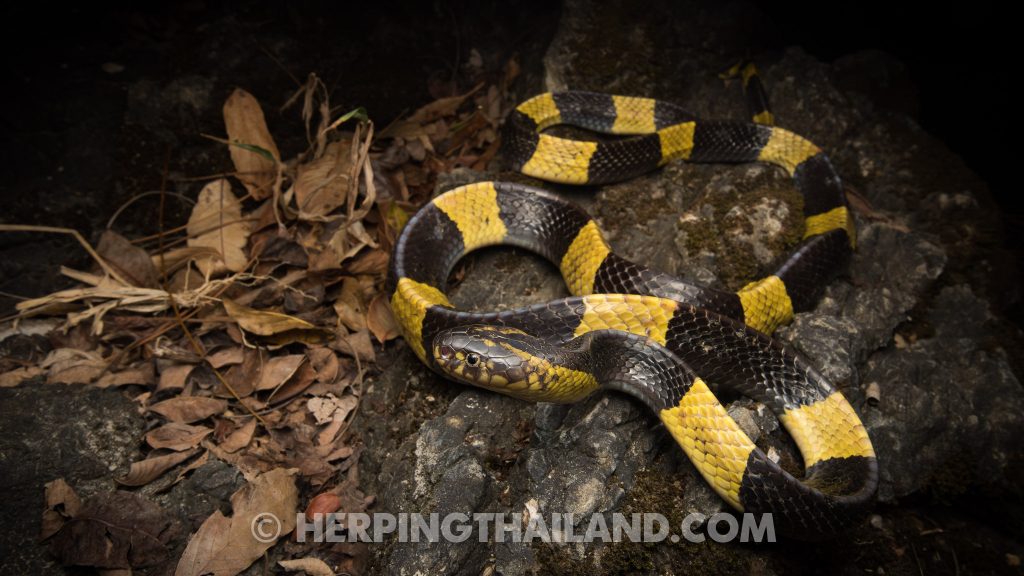 Most of our encounters with the Banded Kraits have been in forest edge habitats, and near streams/ in stream beds. Also in/ along rice paddies, preferably bordering areas with more dense vegetation. Seems to get active as soon as darkness falls. Being large snakes with a rather striking pattern, it’s usually not hard to miss. But like all kraits encounters are uncommon so require time and luck. Wet season, and perhaps even the early winter months are the best season.