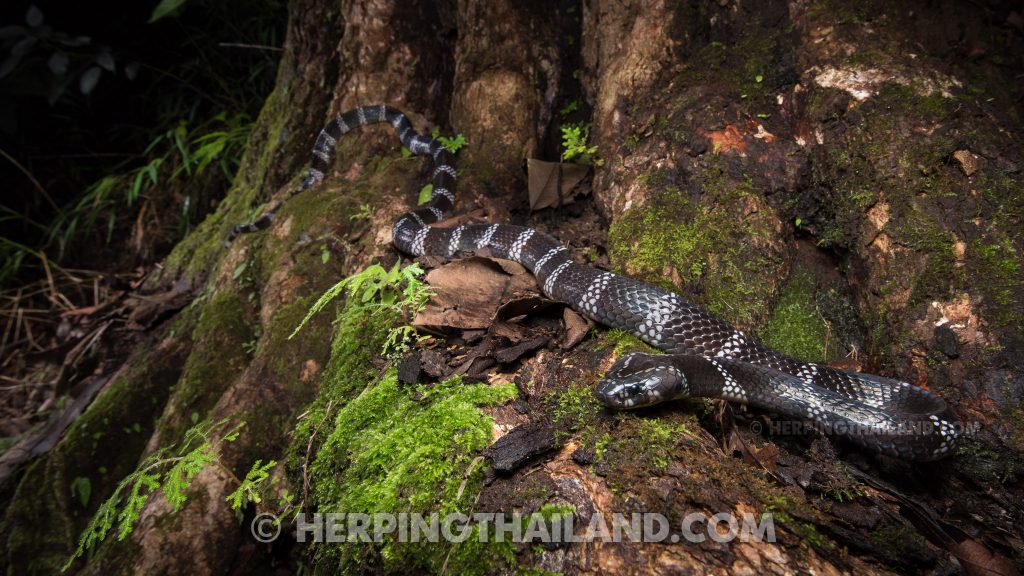 Maybe I was being greedy, but I just couldn’t call it a night when I crossed paths with a Parafimbrios lao early in the evening in Thailand’s northern province, Nan. A rare snake that was only fairly recently (2017 by A. Teynié & S. Hauser) reported for the first time on Thai soil. What a great sighting! It made the very long drive to this region totally worth it, and little did I know what would follow after…
The area I was exploring had proven to host various interesting snakes that were previously only known from neighboring countries. My good friend Sjon Hauser had made several exciting discoveries of species previously not known to occur in Thailand. He was the first one who had found that first live Parafimbrios lao and he had shown me the right spots.
Based on the known similarities of snake fauna with the region of Northern Laos and Vietnam, I had been brain storming with Sjon and also Parinya Pawangkhanant what more surprises could potentially be found there. And it was these dreams that got me excited to explore the region. But what I came across next had never crossed my mind, not even in my wildest dreams.

After photographing the Parafimbrios, I drove to another location to park the car and start herping on foot.
Despite the elevation, the temperatures were fairly mild and every now and then there was a little bit of rain. The weather got me more excited. And as I walked along a roadside drain filled with leaf litter, black and white bands caught my eye.
The head of the snake was hidden in a hole, seemingly foraging for food. But I immediately knew I found something very special. And then the head came up and the unmistakable markings on its head became visible. I just couldn’t believe my eyes.
Who would have thought that this rare snake – only known from several records in Vietnam and one record in Laos – would occur on Thai soil?
It was the first Red River Krait for Thailand, known to science as the Bungarus slowinskii named after the herpetologist that lost his life to a Many-banded Krait bite on a field expedition in a remote region of Myanmar.

What an unbelievable night!

Knowing the importance of the sighting, I took my time to photograph the snake from all angles. The results will follow, below. 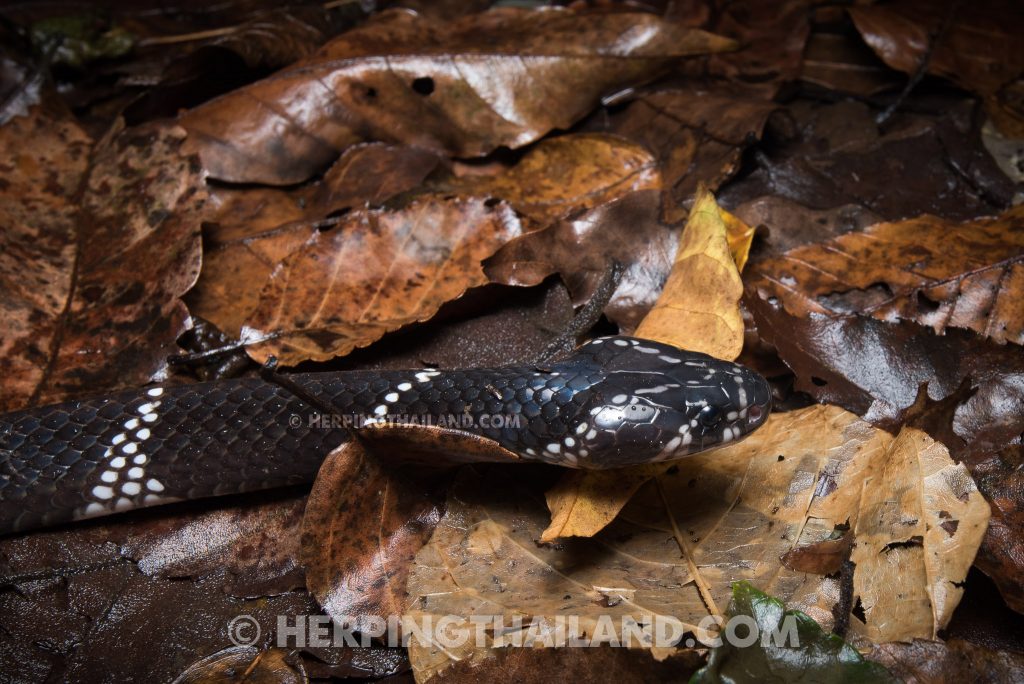 Head of the Red River Krait (Bungarus slowinskii) in Thailand

Little is known about the Red River Krait (Bungarus slowinskii). The species was first described in 2005 by Ulrich Kuch, David Kizirian, Nguyen Quang Truong, Robin Lawson, Maureen A. Donnelly and Dietrich Mebs. In a later publication, a few more records from Vietnam and one from Laos were reported. But other than that there seem to be very few reports of this species.
But here follows some of the information based on my specimen and other sources. 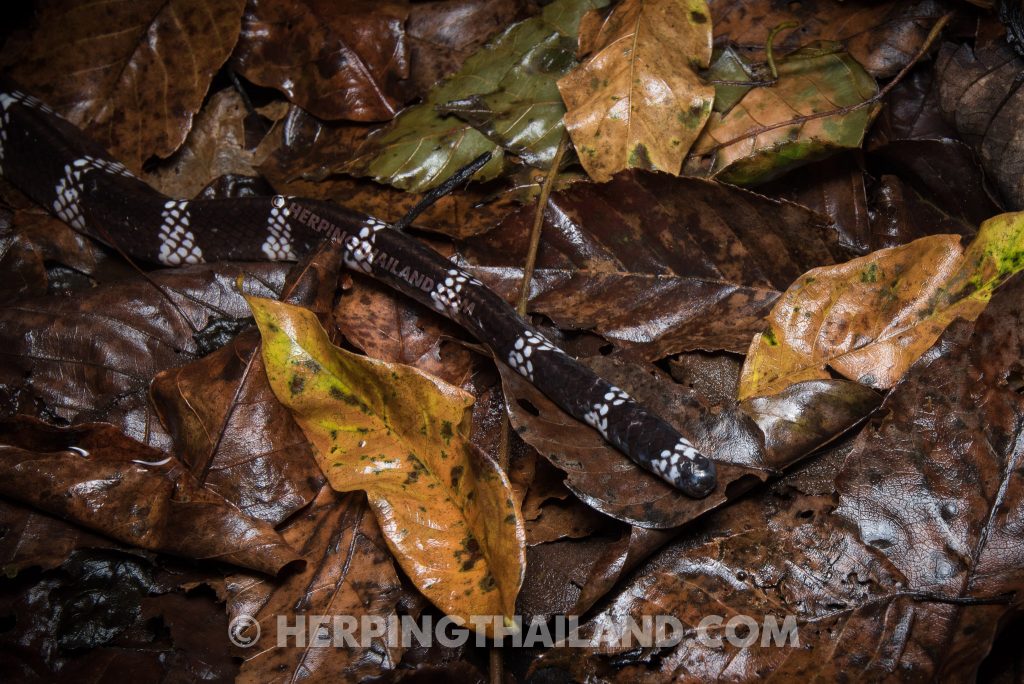 The Red River Krait – Bungarus slowinskii is black with white bands. The scales in the white bands have black edges. The tail has a blunt tip, similar to the Bungarus fasciatus. The head in the specimen we encountered was quite distinct from the body and has white markings on the side and top that form a distinct v-shaped pattern. The tongue is pink with light tips. The specimen found in Thailand was approximately 125cm in total length, and fairly heavy built. 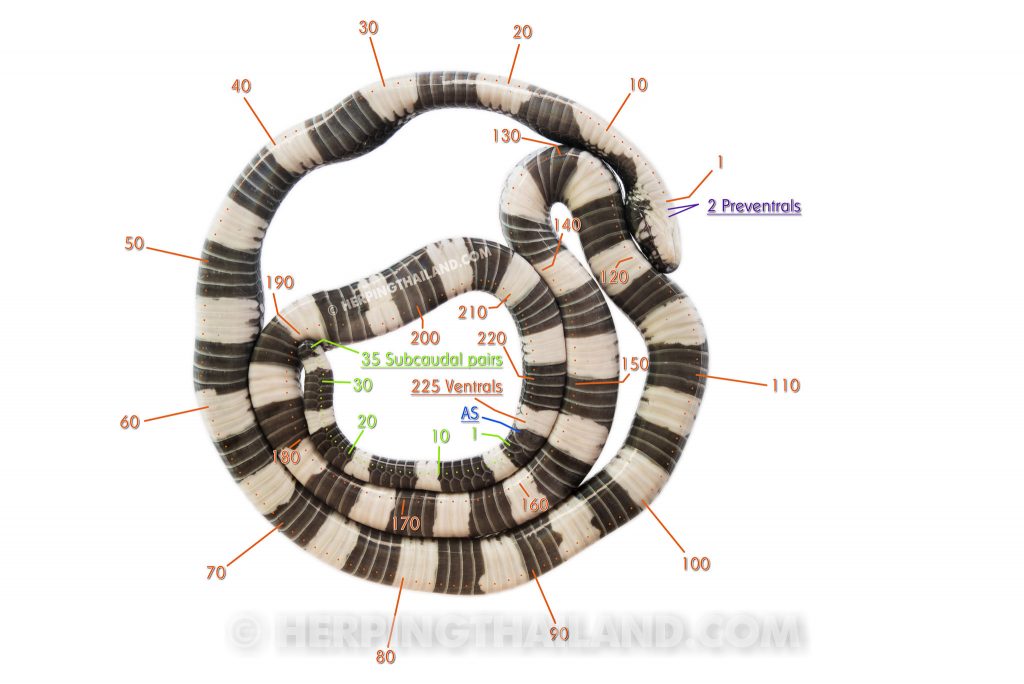 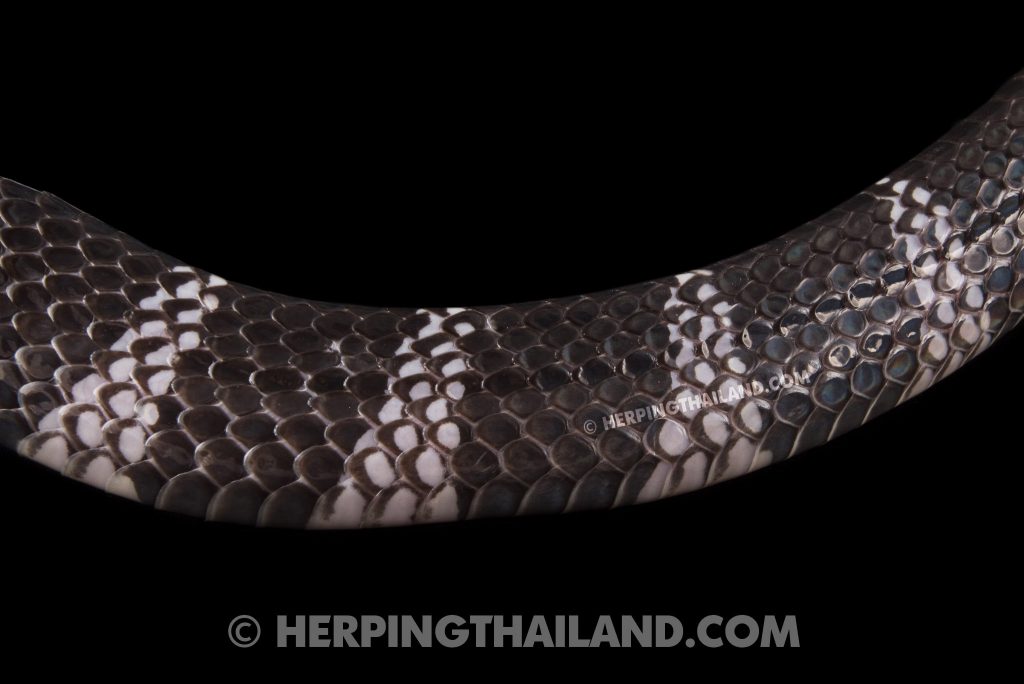 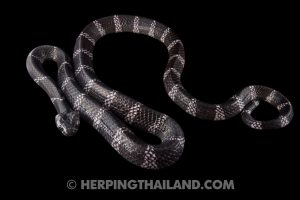 Confusion would be most likely with the harmless large-toothed or wolf snakes, or the other species of krait. If you intend to handle any of the black and white snakes in Thailand, please, stay safe and always consider it to be a krait unless you are 200% positive it is one of the harmless species.

The Red River Krait is known to be nocturnal, and terrestrial. Actively searches for prey, primarily other snakes species. Two viper species (Ovophis sp. and Protobothrops sp.) have been found in the stomach contents of a specimen in Vietnam, reported by Kharin et al. 2011. 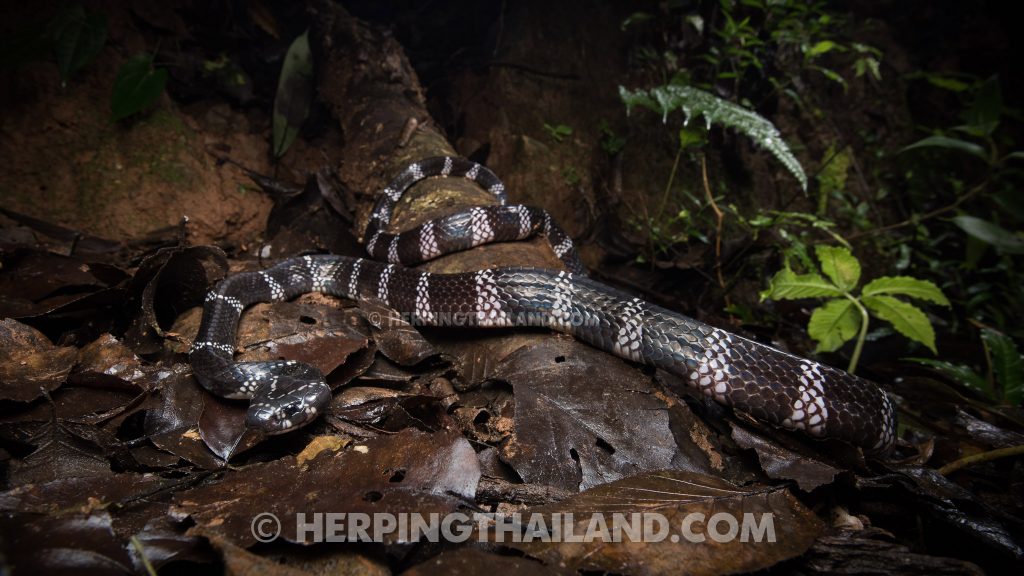 The first Bungarus slowinskii was found in Nan province in Northern Thailand. Elevation 1461m. In evergreen submontane forest within fairly close proximity of a stream. 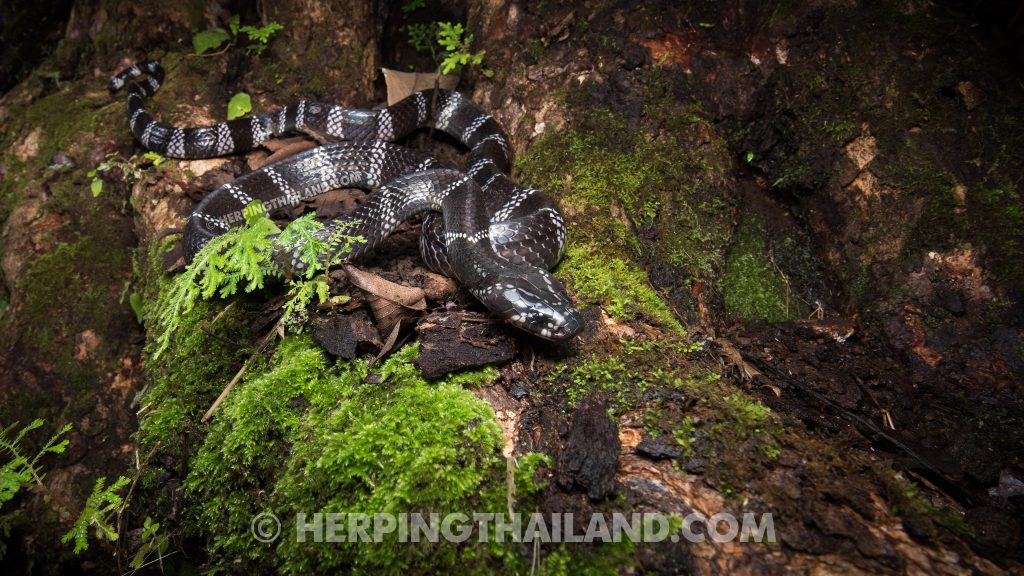 Being such a rare snake, it is not likely to be an easy task to find one. Currently only known from one location in Nan province. Unsure if it is found elsewhere in the region. As with most kraits, it is likely just a matter of spending enough time (potentially a LOT of time) in the right area.