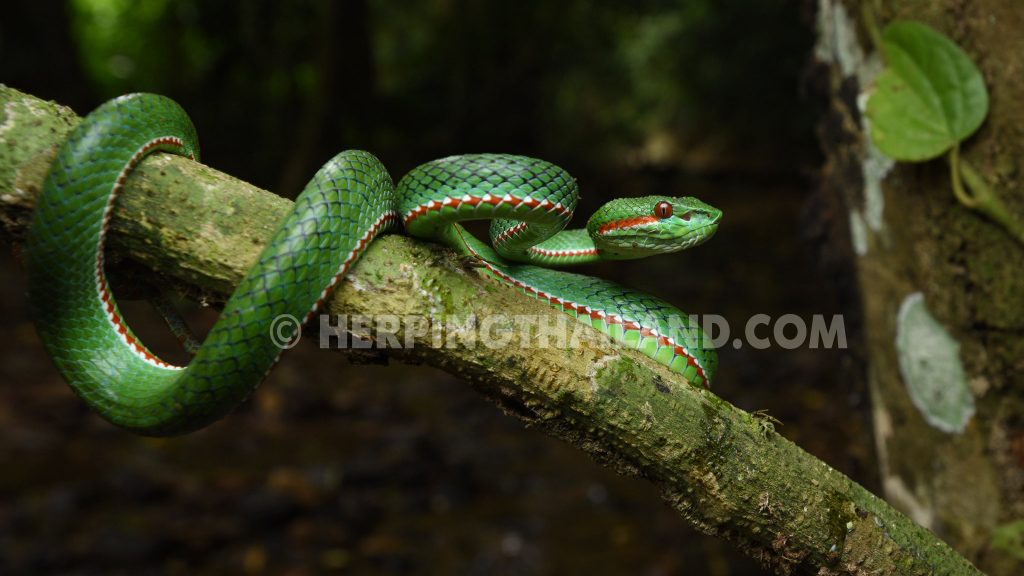 In the recent paper, Troublesome Trimes: Potential cryptic speciation of the Trimeresurus (Popeia) popeiorum complex (Serpentes: Crotalidae) around the Isthmus of Kra (Myanmar and Thailand) by DANIEL G. MULCAHY, JUSTIN L. LEE, ARYEH H. MILLER, & GEORGE R. ZUG, the authors suggest that there is an undescribed species of viper from the Trimeresurus popeiorum complex present in the West of Thailand and the Northern half of the peninsula. Kaeng Krachan national park happens to be our home base since a couple years, and this park lies right in the middle of the region where this new species is occurring. It is one of the more commonly seen snakes in the park especially from 350m asl and higher.

The authors of the paper did not describe the new species, so we will have to wait for someone to pick this up at some point. That means it will be hard for us to go in full detail on the differences between the ‘real’ Pope’s Pit Viper found in Northern Thailand and this new undescribed species from the Northern Tenasserim range. But at least we can share our images of this species and additional information on behavior and how to find it based on our personal experience with this pit viper species.
Some of the info shared might be based on info found on the true Trimeresurus popeiorum (info that might be retrieved from this species as well, before it was known to be a separate species). But based on the similarities in habitat etc chances are the habits/ details of both species are likely very similar.

Both females and males of the Trimeresurus cf. popeiorum have deep red eyes (except in the juveniles) and a deep red mottled tail. The females are bright lime green with a white ventral line. Males are more grass green usually with a red and white ventral line and a red and white streak starting from the eye. But we have seen males that lacked streaks on the head. This species often has banding on its interstitial skin, and we even have seen specimens that had reddish banding on its dorsal scales over the entire body length.

A strongly banded male pit viper, Trimeresurus cf. popeiorum from Kaeng Krachan national park, Thailand. It shows how variable this species can be. 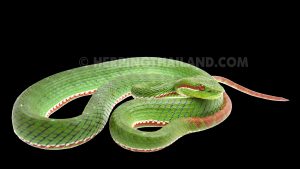 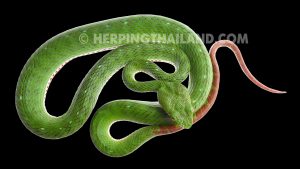 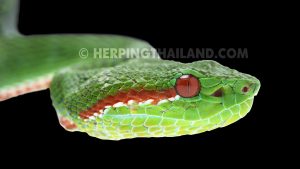 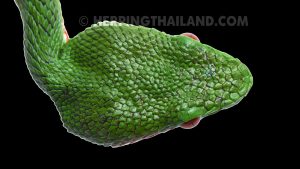 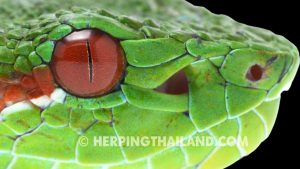 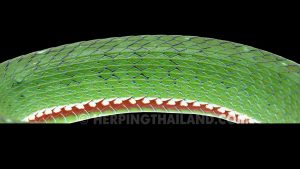 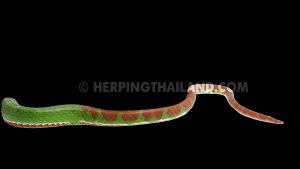 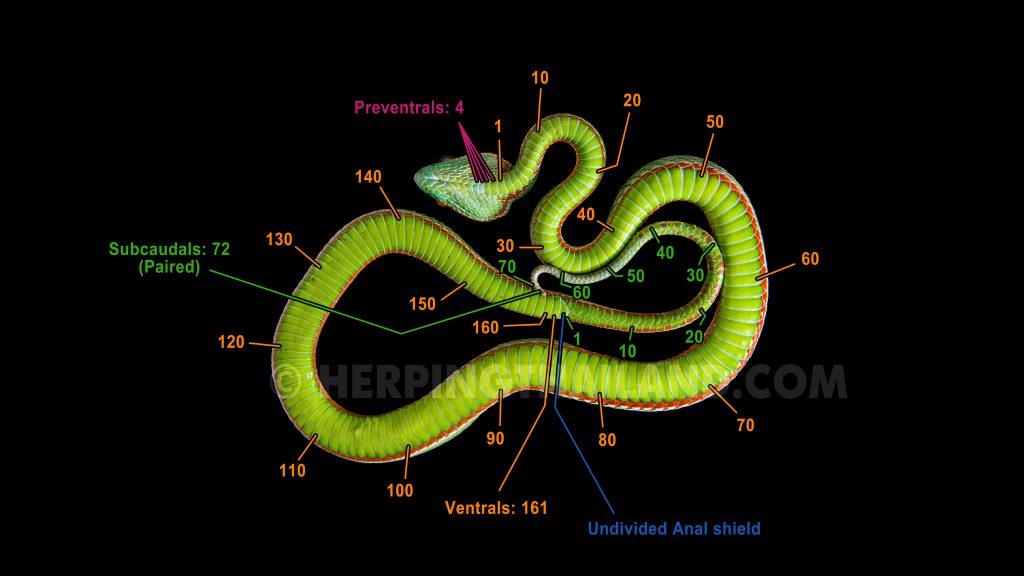 There are various green pit viper species with similar looks, keeping them apart can be tough in certain cases.

Nocturnal and primarily arboreal.
To be continued… 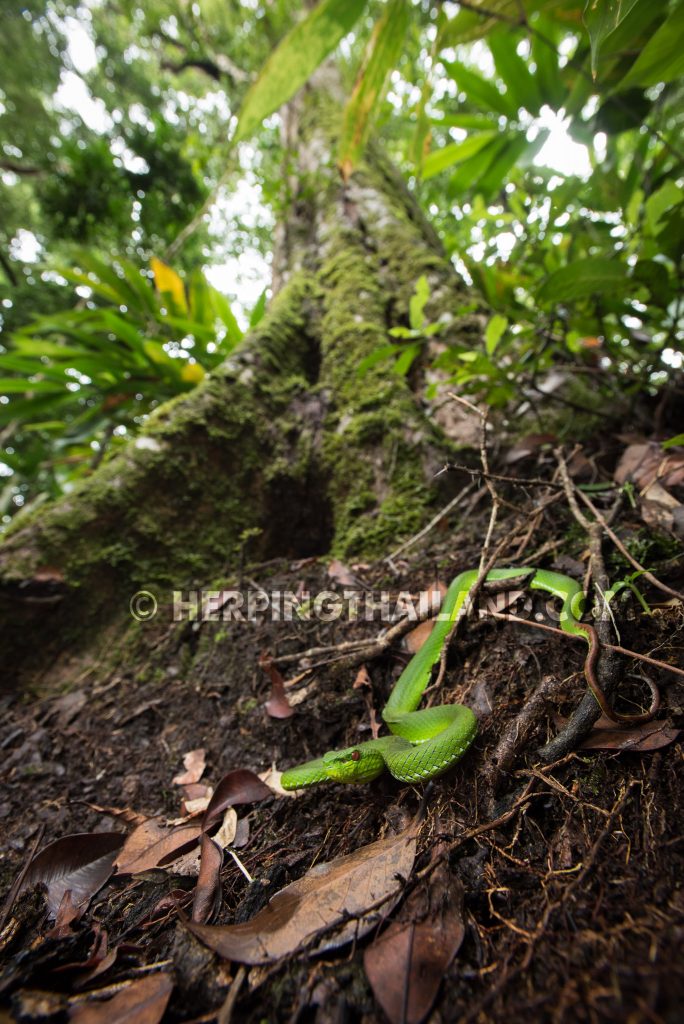 The Trimeresurus cf. popeiorum occurs in the West of Thailand in the Northern Tenasserim range. We have found them from 350m asl up to about 1000m (the highest accessible area in Kaeng Krachan national park). They prefer evergreen forests and riparian forest, usually in quite densely vegetated areas. We have found them in ambush position on the leaf litter on slopes, but in general they seem to prefer to position themselves on twigs/ branches/ bamboo from just off the ground up to 4 – 5m high. 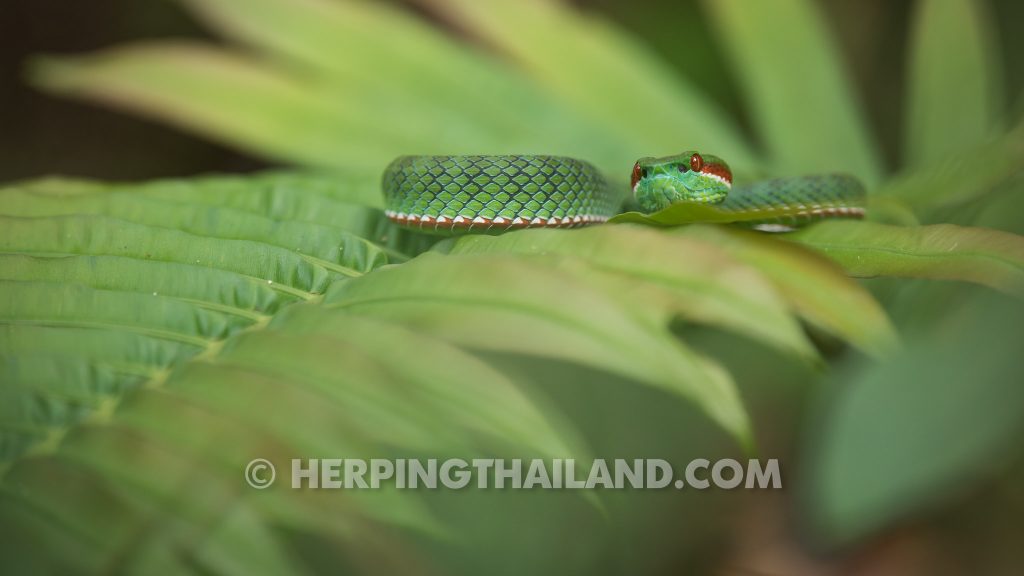 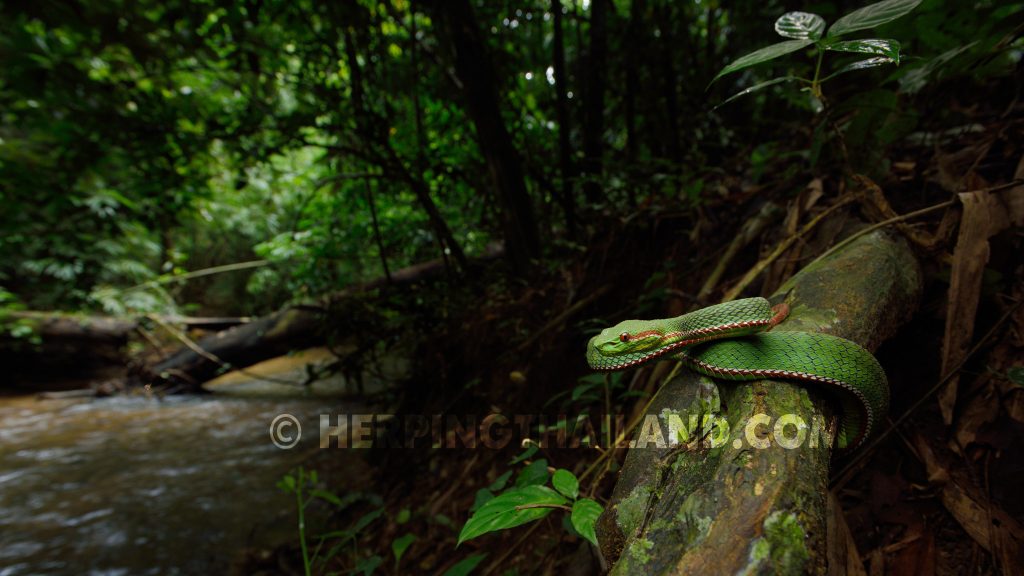 Like most green pit viper species the best time to look for them is at night, though we have found quite a few in daytime as well. Like most of the vipers they usually sit and wait in one spot for quite some time. This species sometimes has a different hiding spot in daytime and will move out once it is dark, but often enough they will be in the same spot in daytime as they are at night.
Since night access can be complicated, a late afternoon walk in the dark forest using your flashlight might suffice, it will be easier to spot them this way then without a light. Water sources are often a good spot especially in drier times of the year.