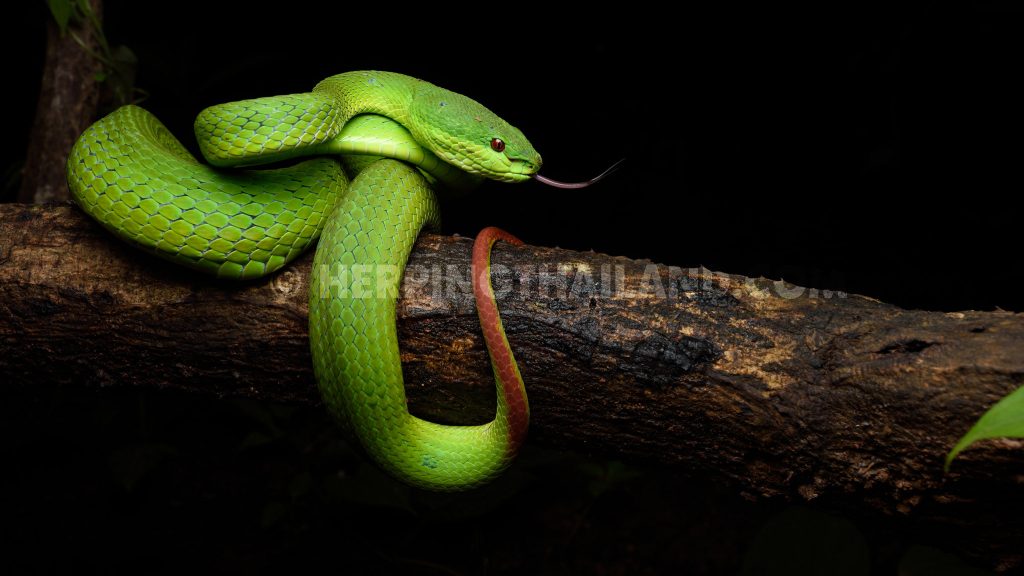 When we first found these red-eyed pit vipers on a trip in 2016, they were still an undescribed species from the Trimeresurus albolabris-complex. The clearest difference between the other Trimeresurus albolabris species found in Thailand is the deep red eye coloration, and the deeper red coloration on the tail. Finally in 2020 this species was officially described by the authors Zening Chen, Shengchao Shi, Jun Gao, Gernot Vogel, Zhaobin Song, Li Ding & Rong Dai.

In the last couple years we have travelled more often to the North of Thailand, and have encountered this common species in various locations throughout the north. From low land up to about 1400m elevation. Often associated with a drier forest type, or more open agricultural areas and the forest edges around these cleared areas. It kind of has made us wonder if this was naturally a higher elevation species, or if they have followed the path of destruction by humans that have moved their farms deeper into forested regions. The logged areas probably pushes the Pope’s Pit viper (Trimeresurus popeiorum) away, and the more open newly created habitat is one where this Guo’s Pit Viper seems to do well.

This species, especially its females, are easily confused with female Pope’s Pit Vipers (Trimeresurus popeiorum). In coloration these are highly similar. Both have deep red eyes, bright green bodies and a red tail.
Still the red on the tails is in a difefrent pattern. More blotched on the Pope’s Pit viper, more of a neat stripe starting from the dorsal ridge above the base of the tail.
Also another difference is the head shape especially visible from the side. The POpe’s Pit vipers have a very pointy nose when seen from the side. Whereas the Guo’s pit viper like other species from the albolabris complex have a more rounded nose in sideview.
The Guo’s Pit Viper often lack or only have a faint ventral line in the females but might have a yellow to white ventral line especially in the males. Pope’s Pit Viper females tend to have a white dotted ventral line.