The Trimeresurus wiroti, commonly known as Wirot’s Pit Viper, or Wirot’s Palm Pit Viper, is a rarely encountered species. It ranges on the lower half of the Thai peninsula, a region that sees a fair number of herpers, but yet sightings are almost unheard of.
With such amazing camouflage, and likely a fairly inactive life style, possibly spending time high up in trees (the books report record(s) at 20m high in the canopy.), it is not surprising that so few people seem to get lucky with this species.
Still the images on this page proof it is not impossible.
This is one of my favorite finds in all my years of herping in Thailand. 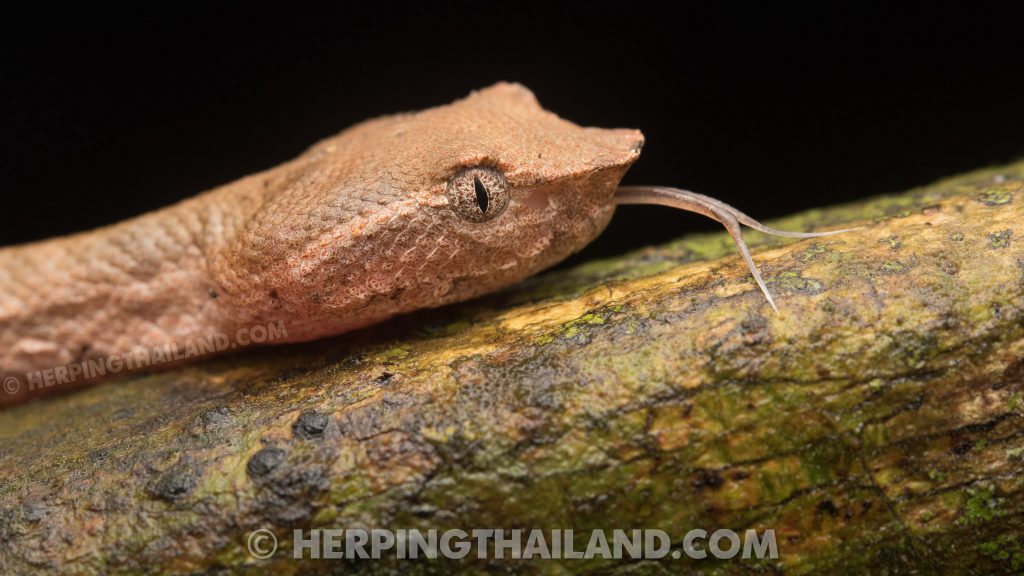 The Trimeresurus wiroti is a brown camouflaged pit viper with a large triangular-shaped head and an unusual nose. Specimens vary in coloration, but tend to be in various brown tints with irregular patterning. From the top, the nose is rather squarish. 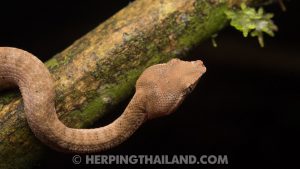 From the side the nose is quite pointy. The ventrals are similar in coloration as the dorsum, finely mottled, darker towards the tail. Scale counts are as follows.
158 – 170 ventrals, 43 – 53 paired subcaudals, dorsal scale formula 19-23. 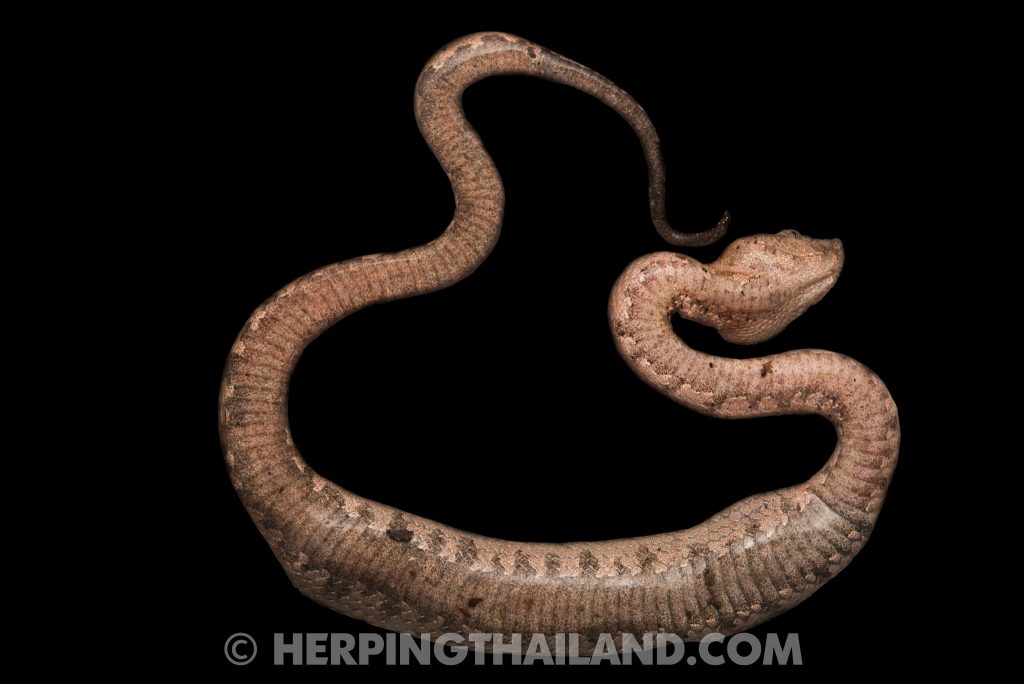 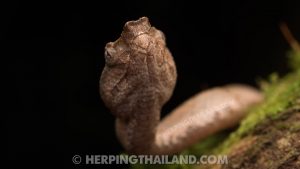 The nose shape seen from below of the Trimeresurus wiroti

There is little known about their behavior. Some records are high up trees, others on the forest floor. Our specimen was roughly 2m above the ground on a small twig. The Trimeresurus wiroti is nocturnal. 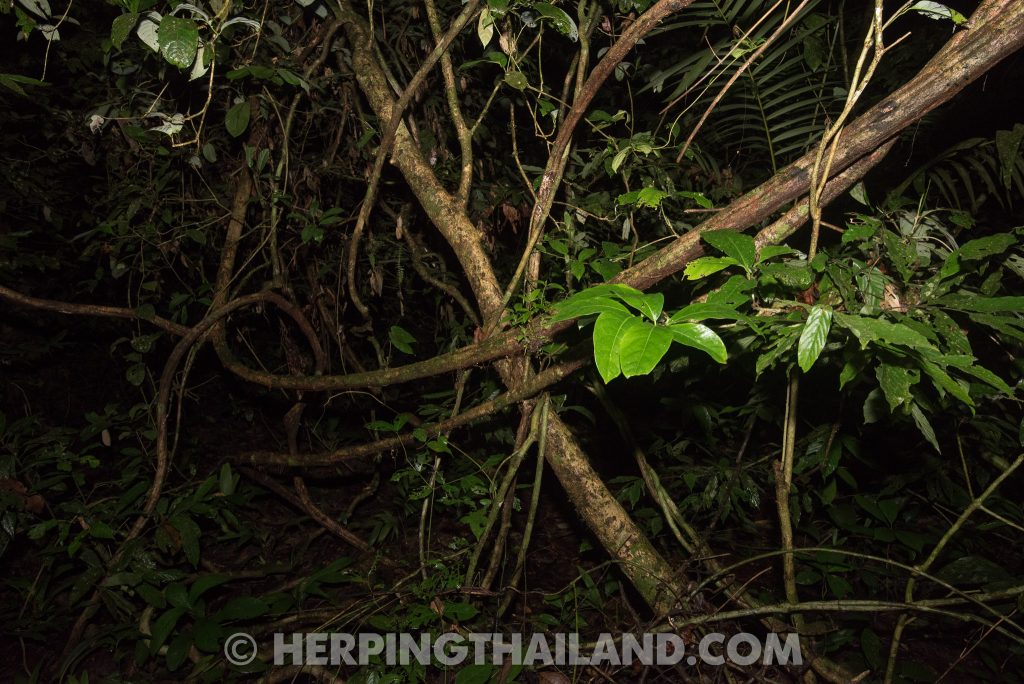 The dense habitat of Trimeresurus wiroti, in close vicinity of a permanent stream in the deep south of Thailand

The Trimeresurus wiroti has so far been recorded from Phang Nga all the way down to the Malaysian border. They can be found in lowland and submontane forest up to 1200m elevation. The specimen we’ve encountered was within about 20m from a small stream, at about 450 – 470m elevation. The direct surrounding habitat consists of vines under a closed canopy of tall trees.

The species was named after Wirot Nutaphand, a Thai herpetologist. Some sources have placed the species in a different genus, Craspedocephalus.

In the past it has been synonymized with Trimeresurus puniceus, but later molecular data has confirmed that Trimeresurus wiroti is a valid species. 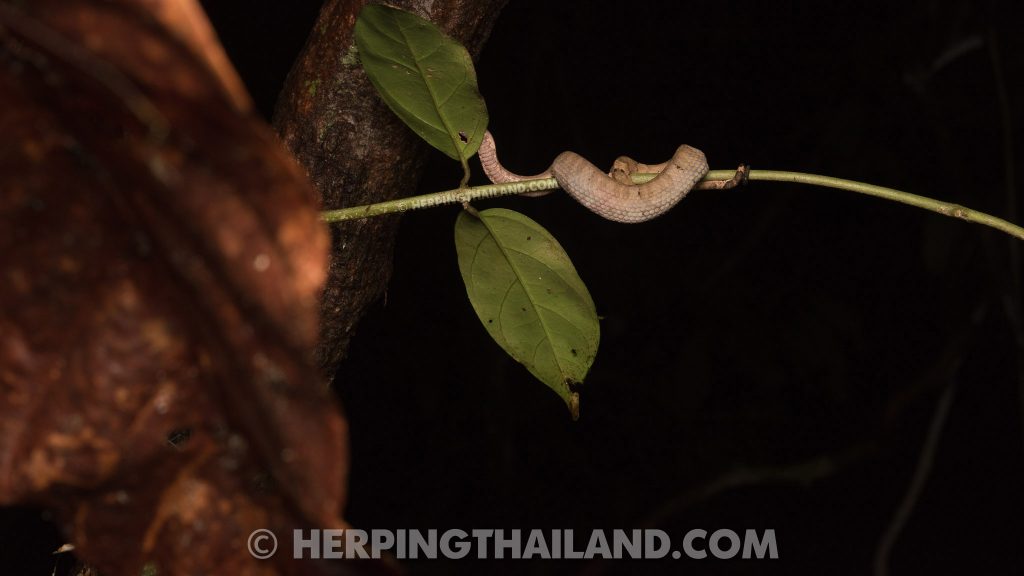 In situ juvenile female Trimeresurus wiroti with a stomach full on a thin twig. Unfortunately this image does not give a good sense of the surrounding habitat which was a lot more dense than it appears to be in this image. See the habitat photo on this page. The twig was situated between dense vines and vegetation.

I’ve only encountered one specimen after various trips in its known range. Based on in situ photos young specimens can be found on low vegetation on the forest floor. Another in situ image of an adult showed the snake positioned against a vertical rotten tree trunk. Again another in situ image showed a specimen on a concrete bridge several meters above a large stream.
On my searches I have been checking trees with vines wrapped around them, or other irregularities on the tree trunk that would allow for a good hide out.
But not sure if that is their most preferred micro habitat.
Some books note specimens are found on or close to the forest floor. The various records I’ve heard about including my personal sighting have been within relative close proximity to permanent streams. Spot avoiding too much direct sunlight and with high humidity are likely preferred.

It won’t be an easy task to find this species. And I consider myself extremely lucky to have seen this species in the wild. But I’ll admit that my experience within its range is still relatively limited. It is not impossible that it is more common than we’d like to think. But spotting them will nonetheless be a challenge.